Book Spotlight: The Bitter and Sweet of Cherry Season by Molly Fader 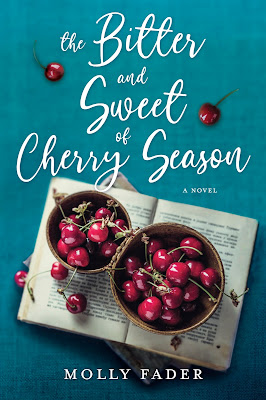 About The Bitter and Sweet of Cherry Season
For fans of Robyn Carr, commercial women's fiction about three generations of women who come together at the family orchard to face secrets from the past and learn to believe in the power of hope and forgiveness.

In cherry season, anything is possible...

Everything Hope knows about the Orchard House is from her late-mother's stories. So when she arrives at the Northern Michigan family estate late one night with a terrible secret and her ten-year-old daughter in tow, she's not sure if she'll be welcomed or turned away with a shotgun by the aunt she has never met.

Hope's aunt, Peg, has lived in the Orchard House all her life, though the property has seen better days. She agrees to take Hope in if, in exchange, Hope helps with the cherry harvest—not exactly Hope's specialty, but she's out of options. As Hope works the orchard alongside her aunt, daughter, and a kind man she finds increasingly difficult to ignore, a new life begins to blossom. But the mistakes of the past are never far behind, and soon the women will find themselves fighting harder than ever for their family roots and for each other.

Add The Bitter and Sweet of Cherry Season on Goodreads.

Night up in Northern Michigan was no joke.

Hope had never seen a dark so dark. It had heft and dimension, like she was driving right into an abyss. She thought about waking up Tink in the back to show her, but the girl had finally fallen asleep and she needed the rest.

And Hope needed a break.

Who knew traveling with a completely silent, angry and traumatized ten-year-old could be so exhausting?

Hope’s phone had died when she got off the highway about twenty minutes ago. In those last few minutes of battery she had tried to memorize the directions:

Left on Murray Street.
Slight right onto County Road 72.
Your destination is five miles on the right.

But County Road 72 wasn’t well marked and now she feared she was lost. Well, for sure she was lost; in the grand scheme of things she was totally off the map.

But she was clinging to the one ratty thread of hope she had left in her hand.

And then just as that tiny bit of thread started to slip out of her fingers, from the murk emerged a blue sign.

The road took a long arcing right into the dark, and she unrolled her window, trying to keep herself awake. Adrenaline and gas station coffee could only do so much against two sleepless nights.

Her yawn was so wide it split her lip. Again. Copper-tasting blood pooled in her mouth.

“Shit,” she breathed and pressed the last of the napkins against her mouth. She was even out of napkins.

In the back, Tink woke up. Hope heard the change in her breathing. The sudden gasp like she was waking up from a nightmare.

Or into one. Hard to say.

“Hey,” Hope said, looking over her shoulder into the shadows of the back seat. Her daughter’s pale face like a moon slid into the space between the driver and passenger seats.  “We’re almost there.” Hope sounded like they were about to drive up to the gates of Disney World.

Tink rubbed her eyes.
“Did you see the stars?” Hope’s voice climbed into that range she’d recently developed. Dementedly cheerful. Stepford Mom on helium. She winced at the sound of it. That wasn’t her. It wasn’t how she talked to Tink. And yet she couldn’t tune her voice back to normal. “There are so many of them. I don’t think I’ve ever seen so many stars.”
Tink ducked her head to look out the windshield and then turned to cock her head at an angle so she could look out the passenger windows.
They’d gone to an exhibit about the constellations at the Science Center a year ago and Tink still talked about it. Pointing up at Sirius like she’d discovered it herself.

“Aren’t those the pieties?” Hope got the name wrong on purpose, hoping for a snotty-toned correction from her miniature astronomer. Or at least a throat-clearing scoff.
But no.
“Sooner or later you’re going to talk to me,” she said. “You’re going to open that mouth and all the words you haven’t said all day are gonna come pouring out.”
Silence.
“Do you want to ask me questions about where we’re going?” They were, after all, heading deep into Northern Michigan to a place she and Tink had never been, and Hope had never told her about until today.
Tink rubbed her eyes again.
“Or maybe what happened…tonight?” Her gaze bounced between Tink and the road.
When you’re older, you’ll understand. When you’re a mom, you’ll understand. She wanted to say that to her daughter, but she herself barely understood any of what had happened the last two days.
Still silence.
Hope tried a different angle. “I’m telling you, Tink. I know you and you can’t keep this up much longer. I’ll bet you ten bucks you say something to me in five…four…three…two…” She pulled in a breath that tasted like tears and blood.

Her beat-up hatchback bounced over the uneven asphalt and Tink crawled from the backseat into the front, her elbow digging into Hope’s shoulder, her flip-flopped foot kicking her in the thigh.

The degree of parenting it would take to stop Tink from doing that, or to discuss the potential dangers and legality of it, was completely beyond her. She was beyond pick your battles, into some new kind of wild west motherhood. Pretend there were no battles.

They drove another five minutes until finally, ahead, there was a golden halo of light over the trees along the side of the road, and Hope slowed down. A gravel driveway snaked through the darkness and she took it on faith that it had been five miles.

Please let this be it.

The driveway opened up and there was a yellow-brick, two-story house.

The Orchard House. That was what Mom called it in the few stories she’d told about growing up here. Actually, the words she used were The Goddamn Orchard House.

It was a grand old-fashioned place with second-story windows like empty eyes staring down at them. White gingerbread nestled up in the corners of the roof, and there was a big wide porch with requisite rocking chairs.

Seriously, it was so charming, it could have been fake.

The car rolled to a stop and Hope put it in park. Her maniacal new voice failed her, and she just sat there. Silent.

Suddenly the front door opened and a dog – a big one, with big teeth – came bounding out. Cujo stopped at the top of the steps and started barking. Behind the dog came a woman in a blue robe carrying a shotgun.

Tink made a high panicked sound in her voice, climbing up in her seat.

Hope’s impulse was to turn the car around and get out of there. The problem was there was nowhere to turn around to. They had no place left to go.

“It’s okay, honey,” Hope lied. She went as far as to put her hand over Tink’s bony knee, the knob of it fitting her palm like a baseball. “Everything’s going to be all right.”

More desperate than brave, Hope popped open the door. The dog’s bark, unmuffled by steel and glass, was honest-to-god blood curdling. “Hi!” she yelled, trying to be both cheerful and loud enough to be heard over the barking.

“Get your hands up,” the woman on the porch shouted.

Hope shoved her hands up through the crack between the door and the car and did a kind of jazz hands with her fingers.

“What do you want?” the woman asked.

She stood up, her head reaching up over the door. “Are you Peg?”

“Never mind, me. Who the hell are you?” She pointed the business end of the gun toward them.

Hope quickly side-stepped away from the car door, and Tink reached across the driver’s seat and slammed it shut.

The heavy thud of the engaged lock was unmistakeable.

The gun lowered and the woman’s face changed. From anger to something more careful. “Hope?”

About Molly Fader
Molly Fader is the author of The McAvoy Sisters Book of Secrets. She is also the award-winning author of more than forty romance novels under the pennames Molly O'Keefe and M. O'Keefe. She grew up outside of Chicago and now lives in Toronto. Follow her on Twitter, @mollyokwrites.