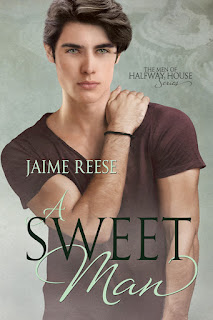 Gabriel threw his head back and laughed.

Without thinking, Ben reached out and flattened his palm against the base of Gabriel's throat. He closed his eyes, reveling in the vibrations against his skin. He could feel Gabriel's laughter, the rich beat like the thumping bassline of music. But this was Gabriel's song. And it was more beautiful and magical than Ben could have imagined.

Oh, how I've missed reading Jaime Reese's words. Her Men of Halfway House series is one of my all-time favorites, and I was thrilled when I found out that there was a seventh book in the offing. And after having read A Sweet Man, suffice it to say that the wait was oh-so-worth it. I may have shed a few tears while reading this, but there was always this feeling of hope to it, which is a recurring theme in all of the Men of Halfway House books. This can be read as a standalone, however, I highly recommend the first six books, and if you do plan on reading them, you may want to do so in order of release so as to not encounter any potential spoilers in the process.

A Sweet Man is the story of twenty-four-year-old Benjamin Reynolds, who is back at the Halfway House after landing behind bars for violating parole. His trusting nature and inability to refuse anyone has those closest to him treating him with kid gloves, but Ben hopes to assert his independence in spite of his record and hearing impairment. Working at a neighborhood bakery is one of the first steps, and it allows him to work on his baking skills. When he meets his boss's older brother, Ben would love nothing more than to get to know the thirty-eight-year-old security assessment specialist and bodyguard better. But he knows all too well that nothing is permanent, and why would someone like Gabriel "Bull" del Toro want anything to do with him?

Smitten! I was absolutely smitten with this story and the characters. The romance was swoony and the camaraderie and feeling of family made my heart feel full. There's even a hint of mystery and suspense that made me sit up and pay close attention because it was done so well and weaved into the story in a way that I didn't see the twist coming at all. I adored Ben and Gabe and I found myself cheering these two on as soon as they first noticed each other in the bakery. There's also a secondary romance here involving another resident at Halfway House, and that one had me grinning like mad because it was super cute. This book was inspiring and I couldn't help the satisfied smile on my face or the happy sigh from my lips once I was done. I think a re-read of the series is in order! But first, allow me to give A Sweet Man five-plus stars and a very enthusiastic recommendation for anyone who loves romance.

Purchase A Sweet Man on Amazon.