Review: Color Me Pretty by B. Celeste 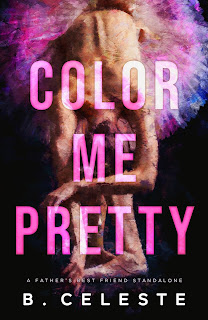 B. Celeste is one of my new author discoveries from last year, and her Underneath the Sycamore Tree from November was one of my favorite reads of 2020. Her newest standalone release is an age gap romance with a touch of the forbidden courtesy of the female main character being the daughter of the male main character's late best friend. Sounds intriguing, right? Which is why there was no resisting getting my hands on this book once I'd read the blurb for it. While the author's writing has remained consistently good in all of the books I've read, I confess that I had my struggles with this particular title, although it was still an overall entertaining read.

Color Me Pretty is the story of twenty-two-year-old Adele Saint James, daughter of the disgraced governor of New York. The scandal that brought down her late father made it clear who she could and couldn't count on. She had her best friend and her aunts as well as a handful of loyal friends. Then there was Theodore West--her father's forty-year-old best friend. He saw Adele grow up from a precocious girl to a stunning young woman. He was always there for his Della, but over the years, she began to see him as more than her father's closest friend. What will being in love cost them both?

I seriously wanted to like this book more than I did, but there was a predictability to it that took away some of the excitement in reading it. The connection between Della and Theo also wasn't as strong as I would have expected, especially given the fact that they both had feelings for one another way before they acted on them. B. Celeste's writing is still impressive, and I certainly wouldn't hesitate to read more from her. I think the story and characters just didn't click with me. 3.5 stars for Color Me Pretty.

Purchase Color Me Pretty on Amazon.