Book Spotlight: That Summer in Maine by Brianna Wolfson 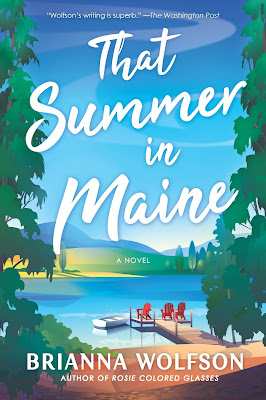 About That Summer in Maine
A novel about mothers and daughters, about taking chances, about exploding secrets and testing the boundaries of family

Years ago, during a certain summer in Maine, two young women, unaware of each other, met a charismatic man at a craft fair and each had a brief affair with him. For Jane it was a chance to bury her recent pain in raw passion and redirect her life. For Susie it was a fling that gave her troubled marriage a way forward.

Now, sixteen years later, the family lives these women have made are suddenly upended when their teenage girls meet as strangers on social media. They concoct a plan to spend the summer in Maine with the man who is their biological father. Their determination puts them on a collision course with their mothers, who must finally meet and acknowledge their shared past and join forces as they risk losing their only daughters to a man they barely know.


Add That Summer in Maine on Goodreads.

An Excerpt from That Summer in Maine
ONE YEAR AGO

All mothers wish a perfect love story upon their daughters. The wish that their daughters will grow up wrapped in love and that one day they will go on to wrap others in love. They wish for their love to be simple and pure and uncomplicated.

As a single mother, Jane did everything she could to up¬hold that perfect love for her daughter, Hazel. At least, she’d tried.

Today, Jane gave birth to twin boys with a man she had recently fallen in love with and married. In the postbirthing haze, Jane could taste the salt on her upper lip where her sweat was now dried. The fiery heat deep within her body was starting to subside and her spine still felt sore and twisted. Jane held one twin against her bare chest while the other was tucked into the crease of her husband Cam’s arm. Jane motioned for him to come closer and embrace the start of their family. “I love you,” she said and kissed him and then the two babies gently. She looked up to see if she could find her daughter. The back of Hazel’s shoulder was just visible in the doorway as she stood cross-armed, looking away from the room. Hazel, at fourteen years old, looked both young and old for her age all at once standing there.

“Come in, honey, and meet your brothers,” Jane said gently.

Hazel turned around slowly, her black hair like a veil in front of her eyes. She shuffled toward her mother without lifting her feet and leaned over her bed. Jane brought her free arm up toward Hazel’s face and tucked her daughter’s hair behind her ear, revealing her eyes of different colors. Her lashes were damp, and her eyes—one green and one hazel—were clear and dewy. A mother can always tell when her child has been crying. Jane leaned over to kiss Hazel’s cheek, but her sudden movement startled her newborn, who let out a brief wail that ended when Jane returned her body to its original position.

“Meet your brother Griffin,” Jane whispered to Hazel, tilting her arm ever so slightly so that her daughter could see her brother’s face. “And that’s Trevor over there.” Cam took a few steps toward Hazel and smiled with pride.

“I thought we were going to name him August,” Hazel challenged.

“Last-minute change. Give them both a big kiss, big sis.”

Hazel rolled her eyes and placed her lips on each baby and then huffed out of the room without another word. To Jane, her family finally felt full. But she could tell that for Hazel, something had emptied.

In her happiness of sharing this moment with Cam and welcoming her two new healthy babies, Jane had neglected to consider the impact on Hazel’s perfect love story. Cam came over and kissed her forehead.

“I love this family,” he said.

Jane let that sink in. Deep. And then wondered if he was including Hazel in his definition of family. And couldn’t deny a shift within her own heart. It had expanded and made room for two more babies. And these two new sons deserved their own pure, simple, uncomplicated love story. And Jane would give it to them wholeheartedly. She felt resolute and focused about it.

Indeed, she forgot to wonder what it would mean for Hazel’s happiness. For her sense of family and her sense of self.

Brianna Wolfson is a New York native living in San Francisco. Her narrative nonfiction has been featured on Medium, Upworthy and The Moth. She buys a lottery ticket every Friday.