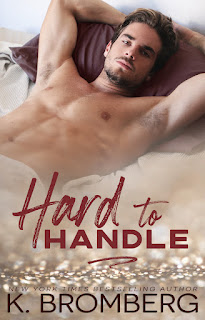 She's everything I need and nothing I deserve.

She's strong, passionate, driven...and I love that she doesn't take shit from anybody, least of all me.

She's seen me at my worst and still love me.

She champions my dreams when I doubt them, and she fights for me when I've stopped wanting to fight for myself.

How did I get to be such a lucky bastard?

Oh my word. And here I though Then You Happened was K. Bromberg at her best. It looks like she's outdone herself and we, her readers, are the ones who get to reap the rewards. Bromberg's new Play Hard series features four sisters who work in their father's sports management agency, and it kicks off with a second-chance, hockey romance titled Hard to Handle. We meet thirty-two-year-old Hunter Maddox, twelve-year hockey veteran and team captain of the Lumberjacks, the team he's been with for the past two years. He has one goal in mind: Win the Stanley Cup. Time is running out for him to achieve said goal, and now, it looks like his antics off the ice are beginning to get in the way of it all. And then Dekker Kincade re-enters his life. She's the one who got away--the one he regrets letting go of but had no choice but to do exactly that. He isn't entirely sure why she's around the team, but two things that he knows for sure are that his draw to her is still there, and he can't be distracted by her.

The official blurb for this title gives you just an inkling of what the story is about, and seriously, you can go into this blind and still enjoy the heck out of it. If I had to pick three things I loved most about this book, they would all have to do with relationships--the one between Hunter and Dekker, the one between Hunter and his brother, Jonah, and the one between Dekker and her sisters. All three were complicated to a degree and for different reasons. Without giving anything away, the one between the main characters, naturally, mostly has to do with the second chance that was before them, but it was more than just romance because that wasn't just what their relationship was about. Then there was the one with Dekker and her three sisters, which had me curious because they clearly had their respective issues amongst themselves, but their love for their father and wanting to successfully continue his legacy is what brings them together. I confess, however, that it was Hunter's relationship with Jonah that brought me to my knees. My heart was just...yeah. The pain in my chest and the tears in my eyes couldn't be stopped. I won't say why. Just read Hard to Handle. Seriously. The sooner, the better. Five-plus stars.