Review: Boss in the Bedsheets by Kate Canterbary (Adventures in Modern Dating #2) 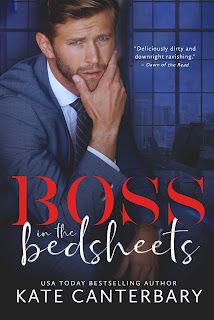 And that was how we operated best⁠—snuggly then rough then awkward then love.


I'm a wee bit embarrassed to admit that Boss in the Bedsheets is my very first read from Kate Canterbary. I know, I know. I already had Fresh Catch on my Kindle app from a couple of years ago, but it wasn't until the opportunity to read and review this author's newest release came about that I was finally able to be introduced to her writing. And well, now don't I feel foolish for having missed out on Canterbary's earlier work? Thank goodness they're in the Kindle Unlimited program because I desperately need to do some major catching up before she releases whatever she may have up next. This latest book is part of her Adventures in Modern Dating series, but it can be read rather well as a standalone, and that is so not a statement I make lightly.

Thirty-five-year-old Ash Santillian is a man who likes things done one way and one way only: his way. Delegating isn't an easy thing for him, so it isn't a wonder that he finds himself, erm, understaffed. Looking through the resumé of one Zelda Besh has Ash adding her to the "rejected" pile with ease, but who would have thought that the very same woman would not only end up becoming his seatmate on the flight from Denver to Boston, but that she'd actually catch him rejecting her resumé? For all intents and purposes, the thirty-one-year-old archeology degree holder whose last job was managing a spirituality shop didn't seem qualified to work in the accounting firm Ash co-owned with his father. But there was something about Zelda that threw Ash's world off-kilter, and now, he wants to keep her in the boardroom and bedroom.

The cynical part of me wondered more than once how two people could go from actual strangers stuck on the same flight as seatmates to working AND living together, but this book got me in the feels and there was resisting its charms was an exercise in futility. Yep, Ash and Zelda and the whole quirky Santillian fam stole my heart and made me remember that once upon a time, I believed that anything and everything was possible when it came to love. There were bits and pieces of Zelda and chunks and hunks of Ash that reminded me of myself, and I adored how they were exactly what the other needed without realizing it. That doesn't mean, however, that things came easily for either one of them. If anything, there were struggles and moments when they resisted the influence they each had in the other's life, but nothing worth having comes easily as the saying goes. Kate Canterbary has easily become one of my favorite author discoveries for the year, and Boss in the Bedsheets has snuck its way on my list of top favorite reads for 2020. It receives five-plus stars. 🖤

Purchase Boss in the Bedsheets on Amazon.