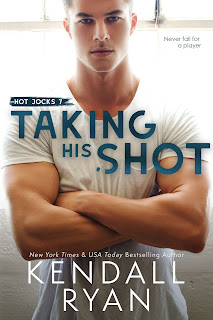 Kendall Ryan started this series off on such a high and she's been so darn consistent with each and every single one of the full-length novels, so ending it on a high wasn't that much of a surprise for me. Reading Taking His Shot was bittersweet because I knew this was the end of the Hot Jocks series, which has become one of my favorites when it comes to the hockey romance trope. Here we have twenty-five-year-old Jordan Prescott, nicknamed Jordie and the Seattle Ice Hawks rookie player. When he wins a date with Harper Allen, you'd think that her being his coach's daughter would be the biggest hurdle. However, it's the fact that Harper has no interest whatsoever in dating a hockey player that's the main obstacle in his path. He may be able to convince Harper that he's not the playboy player she's pegged him to be, but what happens when a secret comes to light and leads her to question everything that's happened between them?

Can I just say that I liked that Harper stood her ground for as long as she did and actually made Jordie work for that date that he won with her? I love it when there's effort being put into a relationship because then you see that they want to make it work but not necessarily trying to hard. These two had that much needed chemistry and I liked the banter they shared. There were a lot of lighthearted and fun moments between the two of them and when they were amongst friends, but there was also a bite of angst thrown in, but nothing that would lead this to becoming a heavy read. Aside from Harper and Jordie's romance, it was great seeing the rest of the couples who all got their happily-ever-afters throughout the series and getting a better idea of where they were with their relationships. I'm sad to bid adieu to the Hot Jocks series but I couldn't have chosen a more fun way to close it out than with Taking His Shot. I'm giving this series ender five stars.