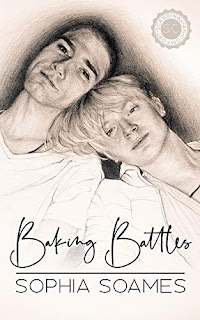 Note: An advanced reader copy (ARC) was provided by the author via GRR ARC Team.

Sophia Soames returns to her Scandinavian Comfort series with the third standalone novel, Baking Battles. This is the most lighthearted among all the currently available books, with very little in terms of angst, not that I'm complaining, even though I do have a thing for angst. It's the story of Mattias Strømme, a single father whose number one priority in life is his daughter, and who works as the chief financial officer of a television network. His expertise lies with numbers and figures, so being cast in a reality baking show was out of his comfort zone. Sure, he knew the difference between a spatula and a whisk, and he could mix ingredients together and could successfully bake after a number of tries, but he certainly wasn't qualified to be a contestant! He's boring and grumpy and not at all appealing enough to be on TV. But even with the pressure of not humiliating himself weighing on him, Matt finds his groove, but can he win the battle he has when it comes to his feelings for a boy he barely remembers and now the show's host, Christopher Pedersen?

Every single time I've picked up a Sophia Soames book, it turns out to be literary experience to be relished, and it continues to be true with this third Scandinavian Comfort story. I liked seeing Matt's development as a main character, becoming more comfortable with the truest and best version of himself. It was like he was slowly but surely loosening up, opening himself up to new things and to the possibility of something special with Chris. Speaking of Chris, the guy was like a burst of sunshine, but he also had his share of insecurities which made me want to give him a hug. The supporting cast of characters was noteworthy, adding that extra bit of goodness that made this an even better story than it already was. While there are a couple of recurring characters, this can pretty much be read as a standalone without worry of missing anything important. Overall, Baking Battles is a 4.5-starred read. 🖤

Read my reviews for the Scandinavian Comfort series: