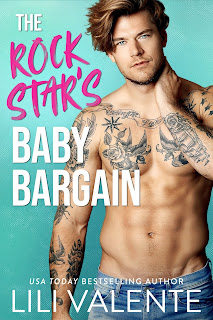 Everyone who hears what I'm writing right now will know I'm falling in love with the girl in those songs.

There won't be a chance in hell of keeping it a secret or explaining it away.Yet another reason to keep Colette in the dark during the songwriting process.

There will be a time and a place to let he know that I'm falling for her so hard and fast it's crazy. But when that time comes, I want her to hear it from me, not a song.


I sincerely apologize to all the members of Lips on Fire because I do believe it's their former bassist who has finally stolen the entirety of my heart. While the first three guys got bits and pieces of it, it's Zackary Jenner Halloran who now owns all of it. And yes, I'm more than willing to share him with Colette Claude Blanchett because the woman is absolutely perfect for him. The Rock Star's Baby Bargain is also different from the three previous full-length novels because Zack is no longer a member of the band, having decided to walk away and pursue his music as a solo artist. To be perfectly honest, I'm not entirely sure if the book remains a part of the Bangover series, especially given that the title doesn't have the word "bang" in it. Maybe it's more of a companion novel or a spin-off of sorts. Either way, I didn't want to make any assumptions, so I've decided to just mark this as a non-Bangover standalone.

Zack Halloran's best friend is Theo Devi; Colette Blanchett's best friend is also Theo Devi. But while Zack and Colette happen to share the same best friend, neither one of them is as close to each other as they are with Theo (who is now married to Cutter Comstock, the one Lips on Fire member that Zack was least closest to). That isn't to say, however, that there wasn't a spark of attraction between the two of them, but it was one that Zack never explored, not with Colette being in a relationship. But with said relationship now over and done with, there shouldn't be anything wrong with Zack wanting to make Colette feel better...in any way possible. Cough, cough. Still, her number one priority remains having a baby, and there's no way she'd ever consider asking Zack for that sort of a favor. He's a rock star focused on his music, for goodness sake. He'd never agree to such a thing. Right?

I adored Zack and Colette! These two didn't have any unnecessary drama going on, although there was a smattering of angst in the story, and you know I have a thing for angst (not to be confused with drama-rama). It was as if Fate finally said, "Well, here's your chance! Get to know each other and get it on already!" They were at a point in each other's lives were they were welcoming change, but neither realized the roles they would play in the shift in trajectory. Their coming together felt natural. There was nothing forced about them, and while getting to their happily-ever-after was certainly not without its challenges, I never doubted their connection. While this is more a companion novel, saying goodbye to the world that began with The Bangover and ends with The Rock Star's Baby Bargain is bittersweet. I'm going to miss these couples but excited for whatever's next. Five-plus stars. ♥