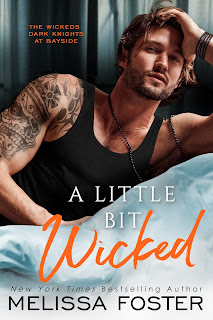 Oh, my. It looks like Melissa Foster's newest family is going to be giving my top two favorites series from this author--The Whiskeys: Dark Knights at Peaceful Harbor and Harborside Nights--a run for their money. A Little Bit Wicked is the first in Foster's The Wickeds: Dark Knights at Bayside, and boy, did it live up to its title. If you're new to Foster's work, you can pretty much jump into this series starter and not feel lost, although I wouldn't be surprised if you end up curious about other couples who make an appearance in this book, so be ready to begin adding to your to-be-read list.

Chloe Mallery has her reasons for having the criteria that she does when it comes to the men she chooses to date, and Justin Wicked doesn't check any of those boxes. He is, after all, a member of the Dark Knights, a motorcycle club that his adoptive father and uncle founded, and Chloe has learned all too well what men who belong to a club are like. Only, the more she learns about Justin, the more she realizes she had him pegged wrong. He's known all along how good they would be together, and while he's waited patiently for a year and a half, Justin believes the time is right for him to finally prove to Chloe that he's the only man for her, and that she deserves the world.

I love starting a new series because it's like opening the door to something that elicits a nervous sort of excitement. The thing is, Melissa Foster isn't a new-to-me author, although I've yet to work my way through her entire back list, so I'm familiar with how well she's able to weave these stories that highlight romantic love as much as it does love for family and community. With this series starter, we have a new family but there's that sense of familiarity as well because of the setting and the fact that some have appeared in past books and there are cameos from past couples and characters. Chloe and Justin were well-developed main characters and I adored their story, making me fully invested in their happy ending. All this while my curiosity was piqued about the other Wickeds and Dark Knights of Bayside. Now that's what you call a fab start to a series, and I can't wait for more. Five stars for A Little Bit Wicked. 🖤