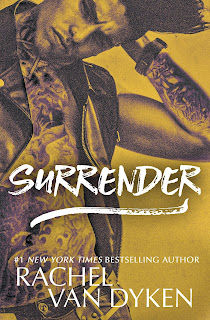 Following closely on the heels of Provoke, a Seaside Pictures novella, comes the release of the fourth full-length novel in the same series. Surrender is the much awaited story of Andrew Amhurst, founding member of Adrenaline and someone who continues to overcome addiction and get over heartbreak brought about by the two people who were once closest to him. I've been itching for Drew's story ever since I finished reading Steal. Three years and three novellas later, it's finally here, and Rachel Van Dyken has made the wait oh-so-worthwhile. Did I mention that he's paired with his protege's single mother who happens to be more than three years older than him and was an absolute fangirl of Adrenaline when she was a teenager?

Everyone around him seems to be falling in love and living their happily-ever-afters, but thirty-six-year-old rock star Drew Amhurst remains the odd man out. It's not like he's purposely trying not to be in a committed relationship. Heck, he can't even commit himself to writing a single song worthy enough to be part of the album Adrenaline should be working on. He finds inspiration, however, in the form of thirty-nine-year-old Bronte Connors. She's a single mother of three kids, one of whom just happens to be the singer-songwriter he's been mentoring for the past few years. Drew's had a crush on Bronte since he first met her, and now, he's got an opportunity to get up close and personal by helping her get her groove back just as she's about to turn forty. Rules are set in place, but you know what they say about rules, and Drew? Well, he has no problem breaking them, but will he end up with a broken heart, too?

Oh, Drew, Drew, Drew. Le sigh. There was so much more to him than the persona he showed the rest of the world. My heart went out to him, and I could easily empathize with how he was feeling, particularly when it came to his own demons that were still right there, ready to pounce. The guy simply wanted someone to choose him--for someone to look at him and see beyond the addictions that plagued him and believed that he was more than how the public perceived him to be. He was an adorably protective Not-Dad to Bronte's youngest daughter, Amelia. The bond he formed with her was different but just as notable as the one he had with Braden, Bronte's only son and the eldest among her kids AND the same Braden whose story plays out in Provoke, the third novella in the Seaside Pictures series which came out in April. Some things came easily to Drew and Bronte, but they had their struggles that needed to be overcome, making their HEA even more meaningful. Five stars go to Surrender.