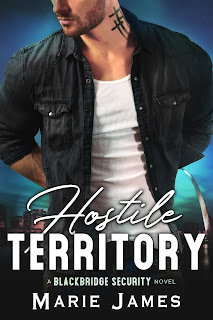 Marie James latest release is the first book in her new Blackbridge Security series. There's a bit of crossover from the author's Cerberus MC series, but pre-reading the books from there isn't necessary in order to enjoy this new series starter or understand what's going on. This romantic suspense read features an enemies-to-lovers trope with an added element of the forbidden since the male main character happens to be the ex-husband of the female main character's best friend, and the divorce was a very devastating one for the male MC. There was no love lost between both MCs, but after years with no communication, all it takes is one timely phone call.

When thirty-two-year-old Deacon Black receives a phone call from an unknown number, he rejects the call not just once but twice. The third time he gets a call, he finally decides to answer and is surprised by whose on the other line--his ex-wife's best friend, Annalise Grimaldi. Deacon has always known that Anna wasn't his biggest fan, so he doesn't quite understand why she would call him of all people. Learning that his ex, however, is in dire trouble has Deacon becoming involved in something that soon turns out to be complicated and life-threatening for everyone, including Anna. He has no choice but to protect her. Can the same be said for falling for the one woman he probably--definitely--should be thinking of as hostile territory?

This was a good start to a new series. There was a lot of suspense mixed into the whole enemies-to-lovers romance, with a slow burn on the latter. Deacon truly was a good man, someone who valued loyalty and brotherhood and would never allow anyone to get hurt on his watch--not even Anna who hated him for years. Speaking of Anna, she was rather lacking in conviction, choosing to remain by her best friend's side even when she knew what sort of person she was. This very same best friend, aka Deacon's ex, also came off as a caricature once we're re-introduced to her late in the book. I couldn't understand how Deacon could have ever loved her, what more married her, or how Anna could be her friend. Sigh. All things considered, Hostile Territory was still an entertaining read, and I look forward to more. It gets four stars.