Review: Die for Her by RB Hilliard (Steele Raiders MC #2) 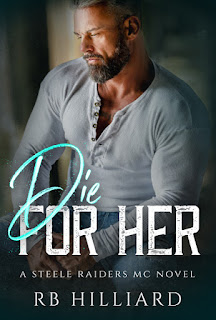 RB Hilliard returns with the second novel in her Steele Raiders MC series, and this time around we've got the story of the club's president himself, Arlan Steele. The burden of being president has weighed heavily on Steele from the moment his father was killed and Steele took over. His relationship with his mother and younger brother has suffered, no thanks to their hatred for the club and everything it stands for, leaving them estranged at best. So family to Steele has been about his brothers and trying to continue the legacy his father left and honoring those whom they've lost. With everything that's happened as of late, the last thing he's looking for is to become distracted, but there's no way he can resist the pull of Luciana Ferina. With her, he doesn't need to be the badass boss that his brothers look up to and rely on; he can simply be Arlan. Their time together is short-lived, but when LuLu witnesses something horrific, it's Steele she turns to. When their worlds collide, will Steele be able to keep her safe, and will LuLu be able to accept the MC life that he belongs to?

My favorite thing about this second Steele Raiders MC series had to be the mystery suspense aspect because goodness, but how this story kept me guessing as to who the true villain was. I had a list of suspects, and I only realized who the villain was the chapter before they were revealed! Gah! I love it when an author manages to shock the heck out of me, and that was exactly what R.B. Hilliard did. As for the romance between Arlan and LuLu, these two were passionate and fiery and kept each other on their toes. Their personalities were as strong as their convictions and they had no qualms expressing themselves with each other, and I loved that neither one let the other get away with much. I'm pretty sure I know who the next book is going to be about, so I'm going to be keeping an eye out for when that's ready for my greedy hands. For now, I'm going to happily hand over Die for Her 4.5 stars out of five stars.

Purchase Die for Her on Amazon | Apple Books | B&N | Kobo.