Book Spotlight: Thinking It Over by Becca Seymour 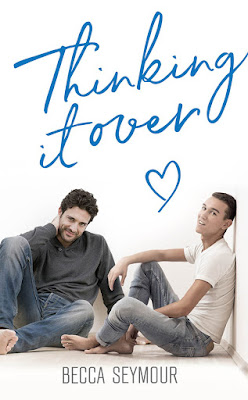 About Thinking It Over
When a young teacher connects with the principal of his school, work and ex issues, the possibility of happiness, and a chocolate Labrador called Penny means they have a lot to think over.

Newly appointed teacher, Jasper Taylor, can't believe his luck. After a year, he's found a job with the possibility of a permanent contract, which finally allows him to put his teaching degree to good use. After meeting the silver-haired principal of the school, Jasper discovers his new position offers an additional temptation. He knows he should retreat, but who said avoiding attraction was easy, especially when the man he's crushing on seems too good to be true?

Well-respected and focused on his career, Austin Harrison is at the top of his game. He's turned a struggling school around, has finally put up boundaries with his demanding ex, and may just have secured full custody of his chocolate Lab, Penny. The appointment of the new English teacher, Jasper, threatens to unsettle the stability he's been working towards. Austin's attraction is immediate, heady, and oh so complicated. But does complicated mean he has to walk away?


Join Jasper and Austin in Becca Seymour’s low-angst, feel-good LGBTQ series, True-Blue Book 4. In the small town of Kirkby, there are busybodies, dogs who cause chaos, families who have the “best” of timing, and where good men have the opportunity to find their perfect match. 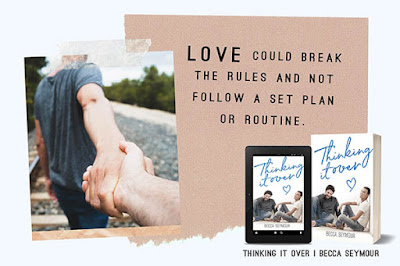 Read my 4.5-starred review of Thinking It Over.

Add Thinking It Over on Goodreads. 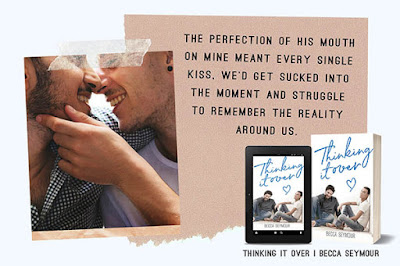 An Excerpt from Thinking It Over
I smiled in greeting. “Morning.”

He yawned in answer, covered his mouth, and followed with “Morning.” As he edged further into the room, he cast a glance around the place. “You get in early?”

“Yeah.” I bobbed my head. “Woke early, so thought I’d head on in.” I continued piling bottles of milk in the counter fridge.

“No, I am, usually. I had a late night with Ian. My own fault. Meant I was restless.” I closed the fridge door, stood, and stretched. I looked at Davis, who’d paused rather than heading directly into the kitchen like he usually did. His brows were high, expectancy written all over his face. I didn’t even need to ask what the look was for. Instead, I shook my head and said, “No.”

He opened his mouth to speak, but I shook my head again. He clamped his mouth closed, and I sighed in relief.

I groaned. I should have known better than to have thought he would let this go. Since I’d dragged Ian to his and Scott’s Thanksgiving get-together last year, Davis hadn’t let up about Ian and me being more than just friends.

But there was no way that would ever be happening.

What Davis didn’t know was that Ian and I had made out once. Albeit a sloppy, drunken version of lips mashing together. We’d ended up pulling away, noses scrunched, and laughing. The connection simply hadn’t been there. Open and honest, we’d agreed the chemistry wasn’t there and the last thing we wanted was to put our friendship at risk. That night, we drank a couple of shots and decided to stick to being friends.

And I was more than happy with that. He had become one of my best friends, and while he was a hot guy, my attraction didn’t go any further than simple admiration. And I knew him well enough to know my feelings were reciprocated.

Davis had other ideas.

“He is a nice guy. A good friend too. We don’t need pushing together.” I rolled my eyes at him.

“If you weren’t my boss, you know I’d tell you to go screw yourself, right?” I threw over my shoulder, amused.

“It’s a good thing I’m your boss and don’t believe in interfering in employee’s lives then, huh?” His words reached me, followed by his snort.

“Yeah, good thing,” I jibed, turning to the cash register and checking the cash and making sure the card reader was set to go.

It was amazing how quickly time flew on by when you had a pretty awesome, down-to-earth boss and a job that relied on routine. The morning rush was long over, and we were getting things ready for the lunchtime crowd. It had been hectic, but we’d managed like we usually did.

I’d just restocked the muffins when my phone buzzed in my pocket. A quick glance around showed no customers waiting, so I pulled it out, expecting to see Mom’s name. A local number lit up the screen. I hovered my finger over Accept as I called out to Davis. “You okay out here a minute? I need to grab this call.”

I smiled my thanks as I hit the button. “Hello.”

I scrunched my brows, wondering who could be calling as I answered, “Yes, speaking.”

“Oh, wonderful. Hi, Jasper. It’s Barb here from Crescent High, Principal Harrison’s PA. I was hoping we could arrange some time for an interview, please.”

Adrenaline coursed through my veins, and my stomach lurched. Crescent High was only thirty miles away. I also knew it was a good school. Crescent was a slightly bigger town than Kirkby and was an easy commute. “Yeah, sure.” I paused for breath, trying like hell to control the high-pitched eagerness pouring forth. “What date were you looking at?”

I concentrated hard as Barb spoke, the pounding of my overeager heartbeat making it difficult. “Is tomorrow at 10:00 a.m. too soon? Principal Harrison is eager to get you in and start the process.”

I nodded eagerly, following up with “Absolutely, I can make that time.” Tomorrow was my day off, so it worked perfectly.

“Superb,” she said. “Just head to the visitors’ reception to sign in, and they’ll point you in the right direction.”

The line went dead, and I pulled it from my ear, staring at the device wide-eyed. For over a year I’d been looking for a position as a teacher, and there had been absolutely nothing. Crescent High was one of the first places I’d checked out. Admittedly, I bugged them at the beginning and the end of every term, letting them know my availability, but I was desperate to return to the classroom. 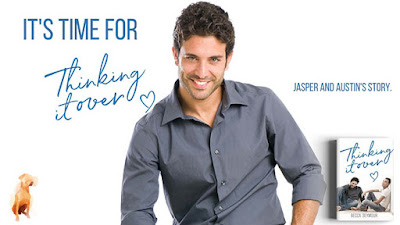 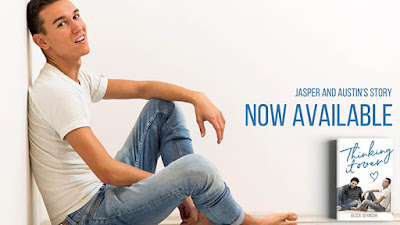