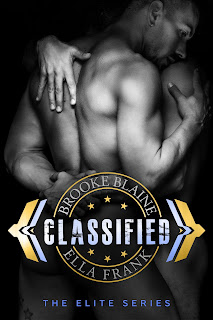 I touched down, climbed out of the plane, and rushed over to Panther, tearing off my helmet. When he looked at me and smiled, I got my first high from being on the ground.


This trilogy has been such a blast to read, and while I've loved the other series that Brooke Blaine and Ella Frank have worked on together in the past, there was just something special about The Elite. In short, this trio of book lived up its name. This is also where I'm going to remind readers new to the series that the books need to be read in order--Danger Zone, Need for Speed, and Classified--because there is a continuing story with the same cast of characters led by United States Navy pilots Matteo Morgan (call sign: Solo) and Grant Hughes (call sign: Panther).

Fair warning: From this point forward, I may end up mentioning something that could turn out to be spoiler-like for anyone that's yet to read the series as a whole or either of the first two books. Got it? Let's proceed... What began as nothing more than sizzling chemistry that demanded to be explored at least once has turned into far more than either Matteo or Grant could have foreseen. Now, they're at a crossroads, both in terms of their still flourishing relationship and their promising careers. Will their time in NAFTA signal an end of what's only just begun for them?

The pace was quick, the development on-point, the romance sweet and steamy, and the flying had me wishing I had a front-row seat to all the action. Matteo and Grant have come so far as both pilots and lovers, with realizations of just how committed they were to each other, followed only be their love of being in the cockpit. Naturally, getting to that happily-ever-after doesn't come easily, but I'm glad Blaine and Frank don't meander and add on unnecessary drama. I'm seriously going to miss our Solo and Panther. Le sigh. Five-plus stars for Classified. ♥