Review: Down and Dirty by Kendall Ryan (Hot Jocks #5) 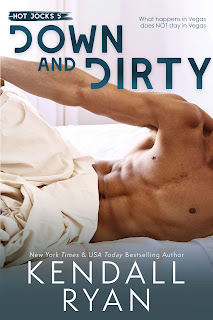 It's time to get down and dirty with the fifth novel--sixth release overall--in Kendall Ryan's Hot Jocks series! Down and Dirty is an older woman-younger man romance with the added elements of hockey and a drunken wedding that leads into an impromptu marriage. Waking up in Vegas next to a hot hockey player is one thing; staring down at the wedding ring on your finger is a whole 'nother matter altogether. But that's exactly the situation Aubree Derrick finds herself in. Sure, Landon Covington is undeniably gorgeous, but at thirty, Aubree is seven years older than the rookie hockey player nicknamed Covey--and jokingly called Lovey--by his teammates. She won't be able to avoid him either, not when she happens to be the director of the Seattle Ice Hawks's charity. The double clincher? Not only is Landon a twenty-three-year-old virgin, but he isn't looking to end their marriage either. No annulment, no divorce. Instead, Landon hopes to date his wife and show her that maybe--just maybe--they do belong together.

It may not come as a surprise that research has shown that Las Vegas has the highest percentage of divorces in the United States, but in a lot of romance novels, more than a fair share of Vegas weddings end with happy marriages. In the case of Landon and Aubree in Kendall Ryan's Down and Dirty, one of the kinda-sorta-maybe twists is that he isn't the least bit interested in divorcing her. I liked seeing how these two were trying to navigate their new relationship by working through things backwards. I adored Landon and how he was sweet and sensitive but also dirty in all the best ways possible. Aubree was also a treat, thanks to her being confident and independent and coming into her own as Landon's wife. The fact that she was cautious in the beginning earned her bonus points with me because she was realistic but also slowly opened herself up to her husband. It was great seeing the other couples from the earlier books and how supportive they were of Landon and Aubree. Five stars for Down and Dirty. ♥

Purchase Down and Dirty on Amazon | Apple Books | B&N | Kobo.