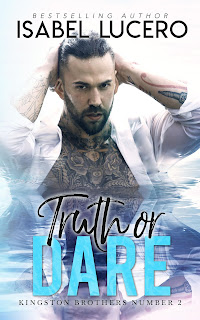 Truth or Dare is the second book in Isabel Lucero's Kingston Brothers series, and the next Kingston on our radar is the nearly twenty-seven-year-old Cillian. He's got his own tattoo studio and a steady stream of clients, but Cillian appears to have lost his muse when it comes to painting anything on canvas. Learning that his ex-girlfriend was cheating on him certainly isn't helping matters, but maybe some time away at a friend's lake house will help clear his mind and inspire him to paint. That friend is none other than twenty-seven-year-old Midge Halcomb. They've known each other since elementary school, and have been good friends ever since. But when alcohol and a game of Truth or Dare lead to a unexpected hanky-panky, things begin to change between the two of them. They go from being friends to friends with mind-blowing benefits, which is a good deal since Midge doesn't do relationships and Cillian just ended his last one. She thinks she's nothing more than a rebound, but he's no longer all that interested in their current situation. You see, Cillian dares to be more than friends with Midge, but can she handle the truth?

With the first book, On the Rocks, setting the bar pretty high, Truth or Dare definitely had a challenge on its hands. This was a good read about two friends who become more, with Cillian and Midge seemingly being more casual friends than close ones. It took quite a bit for me to get into this second book compared to the first one, and I think a lot of that had to do with me not being wholly convinced in the beginning that there was any actual chemistry between the two main characters. However, once Cillian and Midge were in one place for a prolonged period of time, their interactions did belie a certain something beneath the surface. Do I think that they've had feelings for each other all this time? No, not really, although the two do imply that at certain points in the past, they've seen the other in a more than platonic sense. While not as endearing as book one, book two still fared well. Four stars. ♥