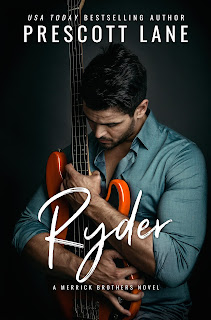 The more I listen, the more I want. I guess that's why he's so popular. His music, like the man himself, leaves you wanting more, leaves you with questions. And with each song, you hope the answer is coming, but never does. It's the greatest of cliffhangers—in music form.

Today is a day that's all about romances where one of the characters happens to be someone in the music industry, with the three books I'm reviewing having three different music genres. The kicker? They all happen to be three of the best books I've had the pleasure of reading this year! It's like kismet, but even if it isn't, I'm thrilled that I had the opportunity (and the time!) to read every single one of these, erm, musician romances. Yeah, calling them rock star romances doesn't quite fit since the term is so music genre specific. One book had a pop star, another a rock star, and the one for this particular review had a country star. Oh, and did I mention that this is part of a two-part series from Prescott Lane, whose writing I've missed (totally not her fault that it's been more than a year since I read Just Love and didn't realize Knox had been released) and catching up meant I read both of the books that were in the series?! Totally fab reading times, people!
Ryder is the second novel in the Merrick Brothers series penned by Prescott Lane, and it's a love story that begins with a one-night stand that leads to an unplanned pregnancy and how to people figure out how to make a go of something that held such promise but abruptly ended with broken promises instead. Ryder Merrick left home at seventeen and has spent the last decade working a music career that's made him the award-winning, chart-topping, multi-platinum artist that he is. His younger brother may have found love, but Ryder is neither looking nor hoping for it. But when he spies the gorgeous twenty-four-year-old he spent one night with in the front row of his final tour stop, he's surprised because this is the same woman he wanted more than one night with before circumstances forced him to leave without warning. What shocks him even more is that Kailey Walker is pregnant with what he believes is his baby. Ryder wants to step up and be there for both Kailey and their unborn child, but while he can give them practically anything and everything they would need, he cannot give Kailey three words she wants.
The story between the covers turned out to be a really surprising one. I went into this blind--it's Prescott Lane, so going in without having read the blurb wasn't an unknown risk--and while the direction that the author chose to take was not what I was expecting, I was all in. This was such an amazing story, one where Ryder and Kailey may have had their first chance at being truly together for more than one night was cut short, only for fate and pregnancy to give them another shot at a possible happy ending. But can a relationship--whether platonic, familial, or romantic--really flourish if someone is unable to tell somebody else that they love them? Many will say that actions speak louder than words, and I totally get that. Those three words are sometimes tossed around so carelessly that many doubt the sincerity behind them. Even that one word--love--is thrown out without thought--I love this, I love that, etc. But as much as I agree that actions are important, words are too. Yet Ryder had his reasons, and goodness, how heartrending those reasons were. This book made me teary-eyed, and I felt so much for these characters, but even though their journey wasn't easy by any means, that happy ending they get is worth the read. Nicely done, Prescott Lane. Five-plus stars go to Ryder.
Release Date: 24 September 2020
Date Read: 24 September 2020
Learn more about Prescott Lane.
Purchase Ryder on Amazon.