Book Spotlight: He Owns My Heart by Evie Drae 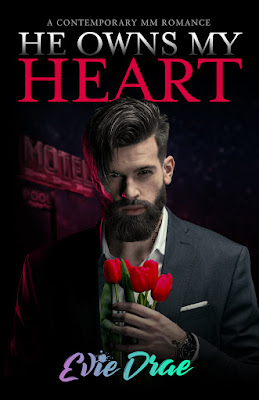 He Owns My Heart
(Owned Heart, Body, & Soul #1)
by Evie Drae
Date Released: August 11, 2020
About He Owns My Heart
2019 Romance Writers of America® Golden Heart® Finalist in Contemporary Romance
2018 Romance Writers of America® Heart-to-Heart 1st Place Winner in Erotic Romance
2018 Romance Writers of America® Gateway to the Best 2nd Place Winner in Single Title/Contemporary Series
Only true love can free a captive heart.
Landon Jenks, retired four-time Golden Glove-winning shortstop for the Chicago Cubs, is lonely, heartbroken, and in desperate need of simple human contact. Trapped in the sticky fine print of an ironclad contract that forbids him from revealing his very-much-single status until the season finale of his reality show airs, he calls an elite male escort service that caters to the rich and wretched.
Accustomed to servicing his often less than savory clients at more upscale locales, twenty-six-year-old Toby Carmichael is surprised when his handler sends him to a run-down motel off I-55. But “surprise” doesn’t come close to describing the shock that rocks his system when a delightful stuttering mess covered in tattoos and nearly ten years his senior stumbles into the room—and right into his heart.
For the first time since Toby was forced into the life of prostitution, a kiss sparks a desire that has nothing to do with money and everything to do with genuine chemistry and the faintest beginnings of something so much more. But Toby’s dark past and troubled present make it impossible to see a future with Landon. And when the truth comes to light, a horrified and helpless Landon is determined to save Toby at all costs.
Content Warnings: Discussion of childhood verbal abuse by an adult survivor, homophobia from a close family member, discussion of previous self-harm/cutting behaviors by an adult survivor, prostitution with dubious consent (all interactions between the main characters have full consent and there are no on-page depictions of dub-con situations), consensual and experimental Domination/submission play between mostly-novice characters, mild violence between a main character and antagonist, and human trafficking associated with illegal drugs (nothing explicit on-page, only discussions related to and psychological/mental ramifications of addressed in moderate detail). 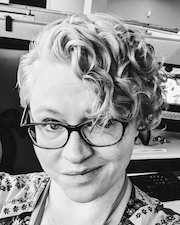 Evie Drae is a registered nurse by day and an award-winning male/male romance writer by night. She has won first place in seven Romance Writers of America® (RWA®) competitions, including the prestigious title “Best of the Best” in the 2018 Golden Opportunity Contest. She is a double finalist in the 2019 Golden Heart®, in both the Contemporary Romance and Romantic Suspense categories, and finished as a second-place runner-up in four additional RWA contests.
One of Evie’s favorite things to do is encourage her fellow writers. To that end, she started the #writeLGBTQ and #promoLGBTQ hashtags on Twitter to support and promote LGBTQ+ authors and allies while providing a safe space to connect and grow as a community. She is married to the love of her life, is the mother of three wonderful fur babies, and runs almost entirely on coffee and good vibes.
Evie loves to link up with fellow writers and readers. You can reach her directly at EvieDrae@gmail.com or find her on her social media accounts listed below. Twitter is where she’s most active but be sure to check out her blog too. She focuses on reviews for LGBTQ+ authors and allies with the occasional quirky advice/recommendation post just to toss things up.
Connect with Evie
Website | Facebook | Twitter | Goodreads