Review: Lost in You by Lexi Blake (Masters & Mercenaries: The Forgotten #3) 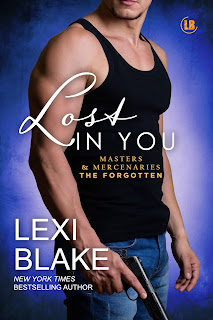 Ever since I first read the first novel in Lexi Blake's Masters & Mercenaries: The Forgotten series--a spin-off of her highly popular Masters & Mercenaries collection--every novel slated for release thereafter landed on my list of anticipated reads. We're now in book three, and it's definitely my favorite in the series so far. Lost in You is the story of Robert McClellan and Ariel Adisa, a couple who've shared a massive connection from the very beginning. But as strong as that connection may be, these two have secrets--Robert the past that was wiped from his memory and Ariel the past that she keeps from the Lost Boys. He's protective of her, but Robert has no idea just what kind of woman Ariel is and how her training has not only made her more than capable of protecting herself--and others--but how formidable an adversary she can be. When both their pasts are revealed, there may be no turning back...

I love how there's never a boring moment within this entire novel. Robert and Ariel's happily-ever-after may seem like a long time coming, but getting there took them a whole lot of hurt and heartache. There is a story arc that plays throughout the Masters & Mercenaries: The Forgotten series, but it's one that begins in the original Masters & Mercenaries series. Now, I've yet to read the latter series, and I went into the spin-off with just a basic knowledge of who headed the McKay-Taggart security group, now called McKay-Taggart and Knight, and I was still able to enjoy the read. I do think, though, that knowing the history involved, particularly when it comes to the Lost Boys, makes for an even more satisfying reading experience, but that's only my personal opinion. To each her own.

One of my favorite things about this book was none other than the female main character herself. Ariel may have been a psychologist whom most of the Lost Boys had gotten close to, but there was so much more to her than "just" that. I loved how multi-layered she was and it was fun discovering how multi-faceted she was as she revealed bits and pieces of herself. Another thing that I seriously liked was the action and suspense involved. I had an idea who the "mole" may be, but that certainly didn't lessen the anticipation in finding out how they got to that point and what it may mean for the overall story arc. This series just keeps getting better! Five stars for Lost in You. ♥

Lost in You (book three) - five stars - My Review (posted above)

Purchase Lost in You on Amazon | Apple Books | B&N | Kobo.