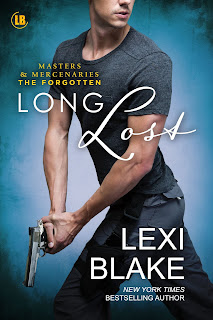 She didn't want him gone. She only wanted to understand what had happened.

"Tucker," she called out.

But he didn't turn around. She was left alone with her doubt and the aching pain her chest that she'd lost something she could never get back.


Oh. Wow. I've been anxiously awaiting Tucker's story ever since I finished reading Lost in You. And here we are, six months later, and I'm simply blown away by what Lexi Blake has given us. Long Lost, which is the fourth novel in Blake's Masters & Mercenaries: The Forgotten series, picks up where the previous book left off. Tucker's only memory of his life is one that's filled with debilitating pain. When the team from McKay-Taggert rescued him and the men he now considers his brothers, the hope overtook the pain, leaving him believing that this was his chance at something better. But soon he learns all about Dr. Steven Reasor--and that he and the infamous Dr. Razer are one and the same. Tucker finds himself lost once again, but this time around, the chaos swirling within him and around him feel almost insurmountable. And then he crosses paths with a woman on the run named Veronica Croft. Roni's memories are filled with ones she's shared with Steven Reasor, and now, he's back...except he's now a man named Tucker. Together they search for answers to Tucker's past, but will the dark past catch up to them first?

Just when I thought this series couldn't get any better, Lexi Blake does her thing and leaves me absolutely gobsmacked. There's action and suspense that's perfectly matched to the romance and sex and then there's everything in between. Tucker and Roni's story is jam-packed, but not to the point where I felt overwhelmed or inundated by too much. I've heard that these two main characters were introduced in the original Masters & Mercenaries series--which I have yet to read, and yes, I swear that I've put it and anything else even remotely connected to it on my to-be-read list!--but since I haven't gotten around to reading that at present, I was still able to fully enjoy and understand what was happening. There were twists that I didn't see coming, and whatever else I may have guessed and figured out still had me at the edge of my seat. After all, with this particular author, I've learned to expect the unexpected. Just a quick reminder: Make sure to read the Masters & Mercenaries: The Forgotten series in order because it's all interconnected. As for Long Lost? It gets a highly deserved five-plus stars. ♥

Lost in You (book three) - five stars - My Review

Purchase Lost in You on Amazon | Apple Books | B&N | Kobo.