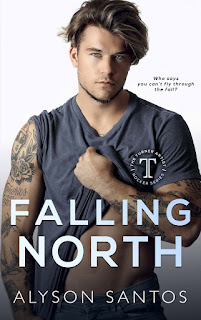 Her fingers brush my cheek, pressing in to turn my head. I close my eyes again. It's my only defense.

“It's because of Matty, isn't it. You know what I'm feeling. You feel it too. But you can't Because Matty always comes first.”


This book! This series! This author! GAAAH! I was in absolute fangirl mode for all three by the time I was done reading Falling North, the second novel in the Turner Artist Rocker series created by Alyson Santos, and for good reason. This had every single thing I could have asked for in a romance and then some! I was totally smitten with the first book, Rising West, so my expectations were astronomically high for this second one. Add to that the fact that Santos was a new-to-me author going into this series who had left me undeniably gobsmacked by both the story and how it was told. After finishing book two, which can very much be read independently of the book one, it was abundantly clear that my initial reading experience of this author was no fluke and that I've been missing out.

Falling North introduces readers to Falling Back North, an aspiring band with a unique sound that blends rock with Latin American vibe, that desperately needs help promoting itself. Their management brings in Lydia Carmichael, a twenty-six-year-old public relations specialist who's out to prove that she's more than the daughter of one of the most successful music producers around. The fact that Falling Back North has a recording contract with her father's recording company is a bonus, but when she realizes that the leader of the band happens to be the guy she hasn't forgotten since the night they met in a bar could be an unexpected complication--the same one who ran from her.

Twenty-seven-year-old songwriter and drummer is someone who's always put his brother and his music ahead of anything and anyone else, but when Alexandre Silva met Lydia Carmichael, he had no clue that she was the woman his younger brother and band mate, Matheus, had been crushing on. Walking away from Lydia was a matter of survival--there was no way Xander would ever do anything to hurt Matty. So, imagine his shock when he realizes that his band's new publicist is none other than Lydia. He knows keeping his distance is best, but they're stuck on the bus together while on tour. As Lydia weaves the band's narrative, Xander's hidden history--one that he shares with Matty--and his hold on his feelings begin to unravel. Will everything Xander and Lydia are working towards fall apart and force them to walk away, or could falling in love and being together lead them all in the right direction?

How do I begin to explain how amazed I was with this author's writing as well as the story she offered to her fans and readers? I fell, and I fell hard--not just for Xander and Lydia and their hard-fought and beautiful love story, but for the story of Xander and Matty, two brothers who were each other's only family in the truest and purest sense of the word. This novel had a story and characters that had immeasurable depth, and I tip my hat to Alyson Santos for not taking the easy route, for creating layers that I didn't feel the need to yank off, because I knew that whatever needed to be revealed would be done so in a way that would feel organic. My heart hurt for both Xander and Matty and what they had to endure as children, but as different as these two may have been as adults, there was no denying the unbreakable bond that only they shared. And Lydia? Goodness, but how I adored her. She knew when to gently prod and when to pull back but still be a pillar of support for Xander. She was no damsel in distress--she was her own heroine and was Xander's, too. There's an appearance of one character who now has me eager to wade through Santos's back list soon. For now, I shall bask my Falling North hangover. Five-plus stars. ♥

Read my reviews for the Turner Artist Rocker series: