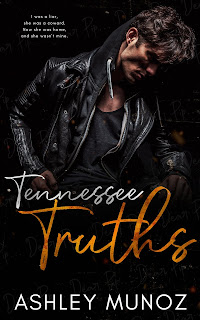 Ashley Munoz is a new-to-me author and her latest release, Tennessee Truths, is my introduction to her writing. This was a friends-to-lovers slash second-chance romance, and it has Jace Walker and Faith Morgan as its main characters. These two were once young and very much in love, going so far as Jace promising that he would marry Faith one day. But promises are as easy to break as they are to make, and they’re forced to walk away, battered hearts in their hands. It isn’t until Faith returns to their hometown five years later that they see each other again. This time, Faith carries the last name of another man, and while he may tout wealth and prestige, it is his wife who carries the bruises and scars—physical and otherwise—of a man she had exchanged solemn vows with. The history between Faith and Jace remains, as does a great deal of hurt and regret. They must now learn to live in the same town, sharing space, adjusting to the changes; but even after five years, one thing remains the same: their love for each other.

First things first: Ashley Munoz’s writing is the sort that I can easily get behind. She has a story to tell and she does it well. I certainly wouldn’t say “no” to reading more of her work the next time an opportunity comes along. I also happen to like second-chance romances, and I appreciated the complexities that the main characters were forced to face once they were back living in the same town. What gave me pause, however, were Jace and Faith. As is often the case when it comes to stories like this is that had the main characters actually engaged in some honest-to-goodness open communication, they wouldn’t have been wallowing in as much misery as they found themselves in for the past half-decade. I get that Jace has been through a lot, but ugh, the passive-aggressiveness as well as he downright abhorrent treatment of Faith did not endear him to me. Then there was Faith, who was just…sad. I wish she had realized early on that she deserved far better from the men in her life. All things considered, Tennessee Truths gets 3.5 stars. ♥