Audiobook Review: Out on the Ice by Lane, narrated by Michael Dean (Out in College #5) 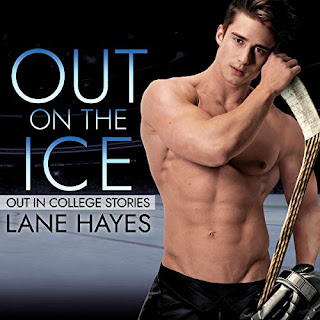 Confession: I’m kinda-sorta-maybe-absolutely addicted to Lane Hayes’s audiobooks. While I may not have every eBook of hers that’s been published, I do have every single one she’s ever released. Every single time she announces that she has the audiobook edition of her latest story, I may get a wee bit giddy with excitement. I swear, her audiobooks are like aural crack, and so, it shouldn’t come as a surprise that when I finally had her fifth Out in College audiobook waiting for me on my Audible app, I couldn’t get my headphones on quickly enough. Now, while I’ve always loved reading Hayes’s books, when they happen to be the kind that I become obsessed with, my expectations for the audio version are grow exponentially!

Out on the Ice brings together a hockey player and a baseball player—twenty-two-year-old Colby Fischer and twenty-three-year-old Sky Jameson, respectively. These two come from different universities, but with Sky needing to take a few summer courses at Colby’s school. There’s instant apprehension on Colby’s part when he first encounters Sky, but maybe a lot of that has to do with the fact that he’s got this unexpected fascination with the guy. Avoiding him isn’t an option, not when they share a class together and Sky is now interning at the accounting firm Colby’s stepfather is a partner at, and Colby is the one who has to train him. Strangely enough, the two forge a friendship, one that pretty much feels like more. And to make matters even more complicated, Sky is gay but in the closet and Colby is straight…isn’t he?

There was a lot of tension between Colby and Sky, and while that leapt off the page thanks to Lane Hayes’s writing, Michael Dean breathed new life into these characters and their story. Think of it as bringing what’s already an amazing book to even loftier levels. See, this is what I love about listening to this particular series of audiobooks from the combined efforts of Hayes and Dean—it’s experiencing something you already fell in love with once before and falling in love all over again, only this time, it’s even better than you remembered. I loved how Colby and Sky developed as main characters and how their relationship changed from two people who were wary of each other to becoming friends and then far more than either of them could’ve anticipated. The underlying message of self-acceptance is a recurring theme throughout the series, and Hayes and Dean never fail to portray it as well as they do. Five-plus stars for Out on the Ice. ♥

Purchase Out on the Ice on Audible.