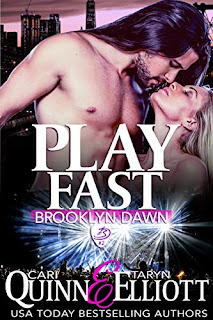 No writing duo pens rock star romances quite as well as Cari Quinn and Taryn Elliott do, and even the months spent waiting in between books in a series are made worthwhile once you get the latest novel in your greedy hands. With Play Fast, the second novel in their Brooklyn Dawn series, Quinn and Elliott offer up a mash-up of three popular tropes: rock star or celebrity, falling for your sibling's best friend (or conversely, falling for your best friend's sibling), and enemies to lovers. Daisy Flannigan is done. She's sick and tired of her best friend's brother avoiding her like the plague. It's been five years since they last spoke, but now that she's working as the hair and make-up artist on the current tour of Brooklyn Dawn, the same band that Osmond Taylor belongs to as its resident bassist. The time has come for Daisy and Oz to finally deal with what happened five years ago, but how will they handle the past that ties them together and could there be any hope of these two now moving forward...together?

A quick FYI: While each of the books in Cari Quinn and Taryn Elliott's Brooklyn Dawn series features a different couple, it's important to note that there is a particular story arc that plays throughout all the books. So yes, this is one of those cases that reading the books in order will most probably serve the reader best. Also, this series is part of the Oblivion book universe, so other bands and characters are mentioned, but you won't necessarily need to read all those previous novels in order to fully enjoy and understand what happens in this far more recent series. That being said, don't be surprised if your curiosity is piqued. Do not worry; the earlier series are awesome reads.

As always, Quinn and Elliott do not disappoint, and I enjoyed every single bit of Daisy and Oz's story. These two were fiery and passionate--in short, they were far from boring. They deal with some heavy history, and while there were times that smacking Oz upside the head was a very real temptation, Daisy was the true rock star in this book. She stood her ground when necessary and was such a source of strength for Oz when need be. The usual elements of romance, angst, and wit are ever present, but let's not forget that there's an edge of mystery and suspense this time around. With the story arc that spans the entire series, not everything gets resolved in this second Brooklyn Dawn novel; however, Oz and Daisy do get their much deserved happily-ever-after. Play Fast easily snags five stars. ♥