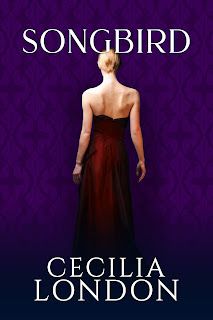 
If you’re familiar with my reviews, then you know I’m somewhat of a stickler for reading books in a series in order. It’s a personal preference but for good reason since more often than not, the books tend to be interconnected to some degree. The Bellator Saga is a series that’s just seen its seventh book go on the market, and with Cecilia London being a new-to-me author, I confess that I may have hesitated a wee bit before ultimately deciding to sign up for the blog tour of this newest release. I had my fingers crossed that Songbird was, indeed, a standalone that I would be able to read without worry that I’d end up feeling lost because of recurring characters. Welp, I’m glad this book’s blurb snagged my interest because this was one heck of a stellar read, one that has me in love with the main characters and their amazing love story—especially the female main character’s story of resilience and rediscovery—as well as curious about the first six Bellator books, all of which feature one couple: the FMC’s best friend and said bestie’s husband.

So, Songbird is the inspiring and enticing story of Christine Spencer Sullivan, the woman who left the United States a wife, mother to two daughters, and an elected Republican representative of her state and becomes an accidental president, widow, and mother to one remaining daughter. With the election of a new leader, fifty-seven-year-old Christine leaves behind Washington to return to Philadelphia—to a life she is still coming to grips with, even after nearly three years that everything cataclysmically changed. She doesn’t quite know how to mend her frayed relationship with her older daughter, but maybe agreeing to meet a man vetted by Susannah will help Chrissy return to her good graces. Only she isn’t the least bit interested in the older man; instead, it’s his son who has captured her attention—but how will Chrissy hold his? Not only is Alexander Guardiola sixteen years her junior, but he’s a liberal who says what he thinks and doesn’t hide how he feels. Opposites may attract, but can they actually have a future together?

I love a fabulously written age-gap romance, particularly when it’s the female main character who is older than the male main character. Chrissy’s tale is one that’s seen triumphs and tragedies, yet she remains standing. Even with me not having read the previous books in the series, I didn’t feel like I was missing much as far as her back story was concerned because Cecilia London provided anything and everything she felt was necessary, whether it be through flashbacks or Chrissy reminiscing with Caroline or Susannah or sharing her memories with Alex. Chrissy is one of those main characters that I would have loved getting to know as a real person. I enjoyed seeing how her relationships flourished with Alex and with those who mattered most to her, but more importantly, it was seeing Chrissy come into her own, as the woman she is after everything she had been through in the tumultuous years of her life. Songbird is a romance, but it’s also about a woman who persevered and embraced how she was a work in progress. Five-plus stars. ♥