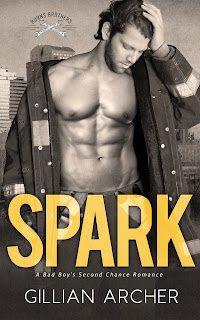 Spark is the third novel in Gillian Archer’s Burns Brothers series, but this time around, the story isn’t about one of the brothers but their cousin, Sabrina Wagner. Growing up with four older cousins who were more like her brothers, what with them buying raised by Sabrina’s mother, she knew all too well how protective the guys tended to be when it came to their one and only cousin turned sister. They may get all up in her business, but there are things she’s still able to keep a secret from most, if not all, of them. So, when the guys hire the company Logan Carter works for, they couldn’t have known that he was tied to her. Of course, the fact that the Logan that stands before her two years after he ghosted her doesn’t seem to know their shared ties either. He’s a shell of the man she once knew—a man she believed she was falling in love with and waited for while he battled a wildfire. Will Sabrina walk away with her head held high, or will she push and explore the spark that still lingers between the two and at what cost to both of them?

There were parts of it that I liked and considered rather promising, but then there were also certain things about it that I wasn’t too much of a fan of. For all intents and purposes, Sabrina was, hands down, the star of this book. She was independent and loved her family but she also wasn’t a pushover, able to stand up for herself when she feels like boundaries have been crossed. A lot of the story also have more to do with her and certain secrets that she uncovers as well as one particular secret that she’s kept from nearly everyone that matters to her. With regards to Logan, well, I wasn’t really all that drawn to him, and his treatment of Sabrina was terrible in the first few chapters. Then I would start to warm up to him only for him to do something that would make me step back yet again. There was also the whole side story line regarding Travis and Vanessa--one of his closest friends and the widow of his best friend, respectively—that just went nowhere. So, taking the good with the bad, I am going to have to give Spark three stars. ♥

Read my reviews for the Burns Brothers series: