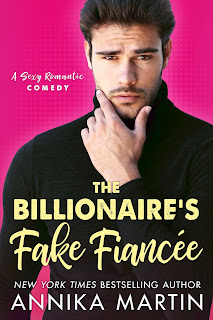 I may be a wee bit addicted to Annika Martin's Billionaires of Manhattan series, so while the wait for the fourth book may have been longer than I would have liked, its release has reminded me that good things come to those who wait! Based on the title alone, and confirmed once you read the blurb, The Billionaire's Fake Fiancée employs the fake relationship trope. Admittedly, this isn't one of my go-to tropes, mainly because there's only so much you can do with it. So, as much as I loved the first three novels in the series, I was a wee bit apprehensive about this latest one. Welp, I guess I shouldn't have worried; after all, there's a reason why Martin has become a go-to author for me over the past couple of years. Like the ones before it, this new book may be read as a complete standalone.

The Billionaire's Fake Fiancée is the story of a self-made billionaire who exudes gloom and the happy-as-a-clam hairstylist who lights up a room. Ooh, rhymes! In order to repair his tarnished reputation, no thanks to a false news profile on him, forty-year-old Rex O'Rourke needs to have a fake fiancée on his arm while spending two weeks on a yacht with his prospective client. He's too busy to find one himself, and tasks his right-hand man to head the search. His top requirement: the woman cannot be his usual type. He doesn't need nor want the distraction, and he wants it clear that this is nothing more than a paid arrangement. The woman chosen for him? None other than his hairstylist, Tabitha Evans. The thirty-one-year-old irritates him to no end with her perky positivity and obsession with soap operas and Hello Kitty. There's no chance he'll fall for her. Until he does, but at what cost to them both?

Okay, it took quite a few chapters for me warm up to not-so-dear--at least in the beginning--ol' Rex. I swear, the man was like a rain cloud, with thunderbolts waiting on the ready.  Naturally, it took a burst of sunshiny goodness in the form of Tabitha to make him realize that there's more to life than the next billion to be made or reaching a certain level of status in the world. These two were layered characters, and I loved seeing how they developed as the story moved forward. Speaking of story, I'm happy to say that this wasn't the usual "fake relationship" romance, all thanks to the author's creative writing. Five stars for The Billionaire's Fake Fiancée. Bring on book five! ♥