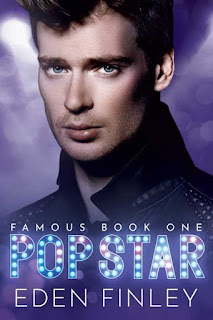 A new series from Eden Finley?! Hell to the yes! Pop Star is the first in her new Famous series, which follows five former members of a boy band named Eleven. This is series starter is also a spin-off of sorts, since it features Harley Valentine, ex-boyfriend of Jay Jackson, whose story played out in Hat Trick, the fifth book in the Fake Boyfriend series. Now, Harley gets his own shot at a happily-ever-after, but is he willing to put his career on the line to claim it and can he truly have it with his all-too-serious bodyguard?

Twenty-five-year-old Harley Valentine recognizes how fortunate he is to have as successful a music career as he does. History has shown just how fickle record labels and fans can be, especially when it comes to someone like him—a former member of a chart-topping boy band who is now a solo artist. That success comes at a price, of course. He writes and sings songs the label prefers, has very little privacy, and keeps his sexuality under wraps. Then his sense of security is shattered, and a human brick house comes along.

Nolan Brixton Reins may have once thought himself a lifer in the US Army, but a devastating event has him opting out and joining the Mike Bravo Ops team instead. Four years later, the now-twenty-eight-year-old Brix is still struggling to get out from under the mountain of debt he’s in, so when his boss assigns him as the personal bodyguard to a pop singer for six months, Brix takes it, knowing the higher pay will help immensely. But if he thought guarding Harley Valentine was going to be boring, he was in for a surprise.

I loved absolutely everything about this book! Harley and Brix’s story was such a formidable beginning to this new series, with a great blend of romance, suspense, and humor plus a pinch of angst to boot! Eden Finley is just one of those authors who never disappoints (knock on wood!), and she’s more than got me hooked already with this new series of hers. Finley did the near impossible by making me second-guess who I thought the villain was, so kudos for that. Five stars for Pop Star. I’m going to need book two SOON. ♥