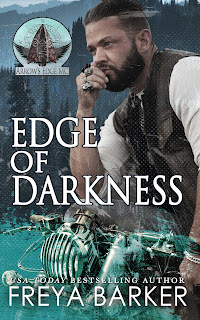 Freya Barker’s books are the ones I automatically turn to when I need something more substantial than cutesy romantic fluff. Her characters are more mature in terms of age, and her stories have a darker tint and heavier tone to them, but never fail to make me think and feel. Her latest release is Edge of Darkness, the second novel in her Arrow’s Edge MC series. If you’re familiar with the series starter, Edge of Reason, then you’ll recognize the main characters in this new book—Yuma and Lissie. That doesn’t mean, though, that you need to read book one in order to enjoy book two. It shouldn’t surprise you, however, that I’m going to recommend that you go ahead and read them in order because, one, Edge of Reason is fantastic romantic suspense novel, and two, there are quite a few recurring characters in both of these fab books.

When he turned forty, Yuma looked into the mirror and didn’t like the shell of a man staring back at him. He was drowning in a bottle of Jack, and this biker needed to work his way out of it. He has struggles, but he’s trying, knowing all too well that the road to redemption is long and often unpaved. He needs to find his place once again in the club he considered family, but what he wants most right now is to earn his place next to Lissie. The thirty-three-year-old is good at her job, earning her respect and honor as Detective Elizabeth Bucco, but Yuma is itching to know who she is behind her badge, and he wants her to get to know James Wells—the man behind Yuma. The two of them together may not make sense, but in the midst of a police investigation that has their paths crossing, their greatest ally could be each other.

One of the things I love most about Freya Barker’s characters is that they’re far from perfect; as a matter of fact, they are all too human, and having a front-row seat to their evolution as main characters is part and parcel of what makes this author’s books must-reads. Yuma and Lissie have their respective caches when it comes to issues, and they do stumble, but goodness, these two refuse to be down and out for the count. This book is not necessarily the kind that you would consider easy, but again, this is why I love Barker’s writing. The story and characters are complex, but at the end of the day, the end goal is simple: for them to find peace and cherish the love they share. With more than noteworthy elements of romance, suspense, and mystery, Barker again gives readers what they deserve with Edge of Darkness. Five stars. ♥

Read my reviews for the Arrow's Edge MC series:

Edge of Reason (book one) - five stars - My Review

Purchase Edge of Darkness on Amazon.