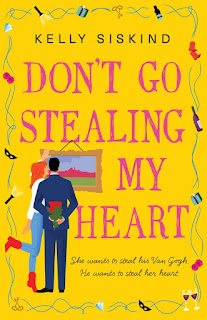 Kelly Siskind is an author whose work I've had the pleasure of reading from her debut release in 2016 to her previous release in 2019. Her first novel for this year is Don't Go Stealing My Heart, which features a thief who likens herself to a modern-day, female Robin Hood, and a geeky guy with a love for Elvis whose wealthy family owns the artwork the heroine has set her sights on. Clementine Abernathy has her reasons for being in the line of work that she's in, and she's not going to apologize for any of it. She steals from the rich and gives to the poor, so while her methods may be, well, criminal, her heart is in the right place. Her next target is a piece by Vincent Van Gogh, and the fact that the owner is supposedly someone who doesn't deserve such fine art just makes this all the more satisfying. But then she meets her mark and quickly realizes that Jack David is nothing like she expected. To make matters worse, she's falling for him, and anyone can tell you that you NEVER. EVER. FALL. FOR. YOUR. MARK. Clementine may have intended on stealing Jack's Van Gogh, but it looks like Jack is intent on stealing Clem's heart.

I went into this book expecting one thing, and got something kinda-sorta-maybe different, which isn't necessarily a an entirely terrible thing. Clementine and Jack's story straddles the line between it being a romantic comedy and an angsty read. There were lighthearted moments, but there was a far heavier feel to this than I'd anticipated. Clementine's back story is somewhat dark, and her past plays a large part in why she's become the person that she is and why she does what she does. Jack, on the other hand, was such a sweetheart, and I think that he was exactly the sort of person that Clementine needed in her life at that very point in time. She was at a crossroads, and having someone like Jack love and support her opened her eyes to something more. Overall, this was an enjoyable read, but it isn't exactly my favorite from Kelly Siskind. When taken apart and laid out, I liked and appreciated what the author offered in this book, but when they all came together, the whole faltered as compared to when you look at the elements separately. While I may not have loved Don't Go Stealing My Heart, I did like it, so it gets fours stars. ♥