Review: Then the Stars Fall by Brandon Witt 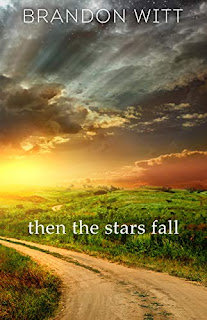 I’d originally listened to Brandon Witt’s Then the Stars Fall a few years ago, but I never had the opportunity to read the book until recently, when Witt re-published the title after getting his rights back from his former publisher. Just like when I listened to the audiobook, I found myself quite drawn to the story of bisexual widower Travis Bennett and gay veterinarian Wesley Ryan. Travis is a single parent, having lost his wife four years prior, and is raising their three children on his own, with his loyal dog by his side. When Wesley meets Travis, it’s in a professional capacity, but he’s undeniably drawn to this other man. However, he also recognizes that becoming involved with the single father would be difficult, what with all the baggage—emotional and otherwise—that Travis has. Travis isn’t looking for love, and Wesley isn’t looking for complicated, but life is about to teach them that what you may need comes when you aren’t looking.

This was such a beautifully written novel, and it left quite an impression on me, both when I first listened to it as an audiobook three years ago and now having read the eBook edition. Travis and Wesley’s story was my introduction to Brandon Witt’s storytelling, and boy, was it one that held me hostage—willingly so on my end!—from beginning till end. A slow burn romance isn’t the easiest of feats to pull off, but Witt did that and more, weaving that particular main element of his book alongside that of family and community. This isn’t lightest of reads, especially given that there is a fair amount of angst in it, which naturally, made this angst addict a very happy camper, but the angst isn’t thrown in for the sake of adding drama. With a memorable cast of characters and set in a town that almost feels like it’s a character as well, Then the Stars Fall is the sort of novel that may well stay with you long past the last page. Five stars. ♥

Purchase Then the Stars Fall on Amazon.