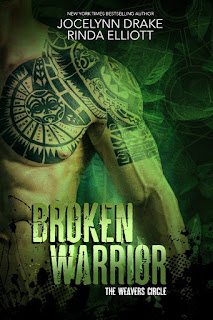 Ummm... I'm going to need more of these Weavers as soon as humanly possible. Would one new book a month be considered soon...ish? Because inasmuch as I loved that the main characters in this series starter got their happily-ever-after, the story arc that's going to play out throughout all the books about the war between the Weavers and the pestilents has me eager to dive even further into this fascinating world that Jocelynn Drake and Rinda Elliott have created. If the rest of the series is as intriguing and exciting as this first one, then consider me strapped in and ready for wherever else the ride may take me next for as long as Drake and Elliott and all their Weavers are driving.

Clay Green has been a wanderer for years, now though, he's on the run in Georgia, being chased by individuals who look like regular people, but something tells Clay something else is going on. He's rescued by an older woman during one particularly close call--a woman who claims she's a goddess and goes on to explain to Clay that he is one of six reincarnated Weavers. Clay doesn't quite know what to do with this fantastical tale of warriors, aliens, and goddesses, yet what gives him pause even more is the presence of the handyman tasked to renovate the plantation house Clay now finds himself in. But will being an Earth Weaver prevent him from pursuing Dane Briggs?

Dane Briggs is a widower who still mourns the loss of his beloved wife and baby boy. Taking on the job of renovating an old stately home in Savannah should keep him busy for months, and the older women who have hired him make it clear that money is not an issue. When a new resident is brought in, however, Dane is shocked, not only by the bloodied and battered appearance of the man, but his draw to him. He hasn't explored his attraction to men in years, but then, Clay Briggs is unlike anyone he's ever met before. But is Dane really prepared to act on his feelings, especially with a man he barely knows and someone who seems to be keeping a few secrets?

From the romance between Clay and Dane to the brotherhood that Clay finds with Baer Manning and Grey Ackles and the sense of family he begins to feel with them and their "aunts", Josephina (Jo), Florina (Flo), and...Willie (not sure what her real name is yet), there was so much to love about this book! Bonus points for Ruby because I'm a sucker for a well-written story that includes a dog in it. Fantasy romance is one of those sub-genres that takes a while for me to fully get into unless it's done remarkably well, and that's precisely what Jocelynn Drake and Rinda Elliott achieved with Broken Warrior, and it's merely the first of at least five more (I'm guessing) to come. Five stars! ♥