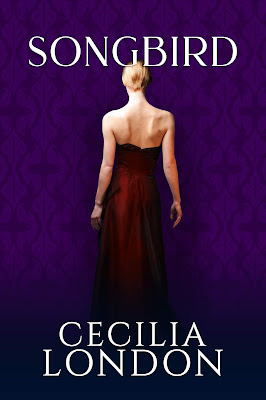 About Songbird
Christine Sullivan isn’t an easy person to love. She knows how the world sees her – aloof, standoffish, cold…perhaps even bitchy. After a lifetime in politics, including a stint with an expat government in exile, President Sullivan has taken her share of body blows, but now she’s back in Philadelphia…a widow, a recovering Republican, a former public servant seeking a quiet, private existence.

On her to-do list - rebuild her relationship with her estranged daughter and invent the rest of her life. She has her best friend Caroline, her brand spanking new condo, and her ever frustrating Secret Service detail to keep her company. That should be enough for anyone, right?

Until Alexander Guardiola comes along… liberal, emotionally unguarded, younger. A lot younger. Everything Christine isn't. And isn't ready for.

But opposites attract, don't they? And hearts and minds can always be changed… 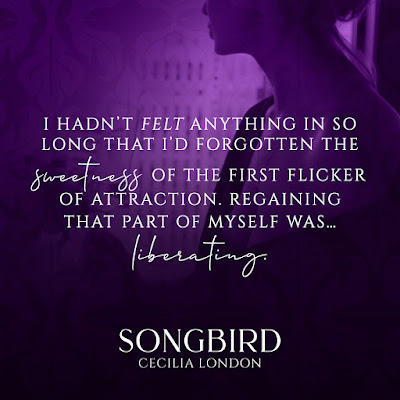 Read my five-plus-starred review of Songbird. 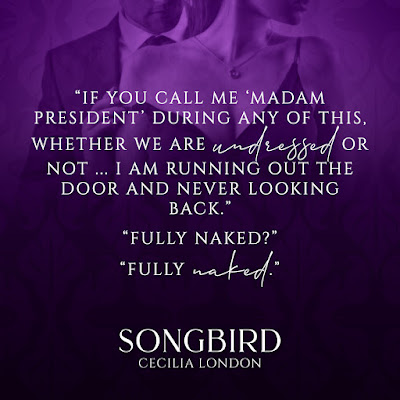 An Excerpt from Songbird
“Dinner sounds good. Does dinner work for you?”

“Yes.” I slid down on the couch in relief. That hadn’t been so hard. The coffee table was safe for now.

All these basic, simple questions that he expected me to have an answer for and I didn’t. Poor Alexander, thinking I’d be a logical, rational person who was able to exchange words with other individuals in a manner that indicated I was able to properly interact in polite society.

“I’m open to suggestions,” I said.

“Do we have to go someplace that serves family style to accommodate your agents? Are they like older brothers who will beat me up if I try anything?”

I had a mostly female detail but didn’t want to ruin his momentum. “We don’t have to restrict where we go,” I said. “Though as a practical matter, it won’t be private if we’re in public.” Obviously, genius. You do the words good, Chrissy.

“I can make you something at my place,” he said. “I whip up a mean lasagna.” He paused again. “Do your agents need to taste the food before you eat it?”

Was he insecure about the strength of his lasagna-making ability, or just curious? “No,” I reassured him. “But I might ask for a taster if it turns out your cooking skills are lacking.”

He was funny. And much more relaxed than I thought he’d be, after our initial stumbles. I liked that. Maybe I could afford to take this a little less seriously. “They will have to run a background check,” I said. “I’ll need your full name, Social Security number, all your major credit cards including that three-digit security code on the back, and a list of your biggest fears.”

My deadpan delivery apparently wasn’t so obvious over the phone. Perhaps it was better to let the snark subside a bit. “Your address and date of birth along with your social should be fine. They just want to make sure you’re not a serial killer.”

“Is that a disqualifier?”

“Depends on who you’ve killed. I’m a vindictive woman who might need a defender every now and again.”

“I’ll keep that in mind when planning the meal.”

I had to do something to demonstrate I wasn’t a total clod when it came to the whole dating situation. I was supposed to offer something up, right? Like a sacrificial goat but more edible? “I can bring dessert. What’s your favorite?”

“Tiramisu,” he said instantly. “I’ll eat just about anything but let’s see how you do with ladyfingers and espresso.”

He was good at poking back. And I had plenty of time to figure out how to obtain said tiramisu. “Done,” I said.

He technically hadn’t requested that I make the tiramisu myself. And I had to impress this man, someway, somehow. I needed to plot, and plot I would. 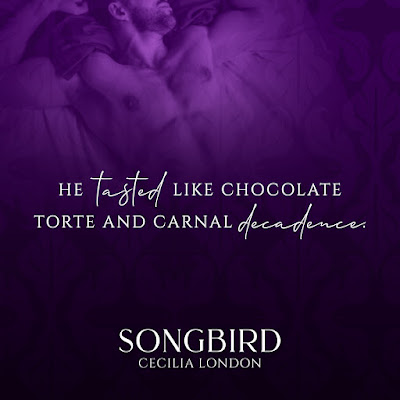 Cecilia London is the pen name of a native Illinoisan currently living in San Antonio, Texas. She's filled several roles over the course of her adult life – licensed attorney, wrangler of small children, and obsessed baseball and footy fan, among others.

An extroverted introvert with a serious social media addiction, she is the author of the Bellator Saga, an epic, genre-crossing romance series, and its spinoff, Songbird. You can most often find her causing trouble on Twitter or, less frequently, on Facebook. 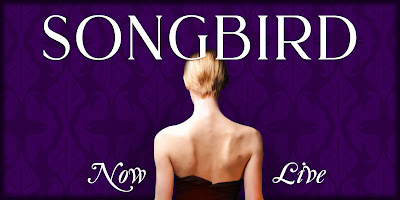