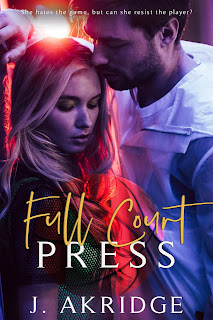 Full Court Press is the debut release from J. Akridge, and it's a sports romance with a single-parent angle to it as well as an interesting twist: the female main character hates basketball, but the first guy to actually pique her curiosity happens to be a basketball player. Kelsi Fran's main focus for the past five years is her son, Carson, so when her close-knit circle of friends insist she join them to watch a basketball game, she begrudgingly agrees. When one of the Atlanta Hawks literally crashes into her during the game, the attraction between them is instant and impossible to deny. Landon Prince may be a star player on the court, but his sole intention off it is to show single mom Kelsi that he's no player, and that she and her son are the true stars in his life. Kelsi's been hurt before, so what will it take for her to give in to her feelings in give in to this awesome guy who plays the sport she hates?

This was a pretty quick read which was low on the angst, although its inclusion here was distracting. The idea of having the heroine hate the game the hero plays professionally was what initially drew me to the story, and paired with the single-parent trope, I went into this book with some excitement. As a whole, this was an entertaining enough read, occupying my time for the hour or so it took me to read it. There was some believable chemistry between Kelsi and Landon, and I certainly like Landon's interactions with five-year-old Carson. Where the book stumbles a tad for me is the angle concerning Kelsi's ex, Kyle, aka Carson's biological father. It felt like something that was added in order to introduce conflict but instead felt like put-upon drama. The insertion of a chapter told from Kyle also wasn't exactly necessary, and the courtroom scene came off as rushed and somewhat bumbling, like a cautionary tale of what happens when you go to court and the other side is totally ill-prepared. Overall, Full Court Press was an okay read that did have positive points, and the promise that J. Akridge shows was notable. 3.5 stars. ♥