Review: Cutie and the Beast by M.E. Carter (Cipher Office #3) 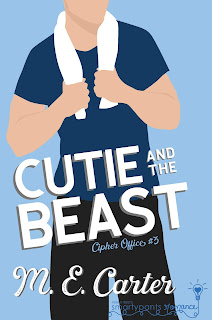 Cutie and the Beast is the third book in the Cipher Office and it's the second one penned by M.E. Carter. Moving out of her mother's place is the best option for Elliott Donovan going forward after her divorce. She's snagged herself a job at the daycare of a local gym called Weight Expectations and she hopes this is the beginning of a better life that she can give her daughter, Ainsley. When one of the trainers at the gym puts up part of his house for rent, it's exactly what Elliott needs. The fact that Abel DiSoto also happens to really cute and a nice guy is a bonus. He's also divorced and has a daughter named Mabel who's the same age as Ainsley. Living under the same roof is a win-win for everyone concerned, especially since Elliott and Abel are going through the same change in marital status and single parenthood. But will close quarters lead to being too close for comfort for all concerned?

I've enjoyed reading M.E. Carter's previous books, particularly her Hart and Texas Mutiny series, so I know her writing clicks with me. I honestly don't know why either of her contributions to the Cipher Office series aren't faring as well. While I had issues with one of the main characters in Weight Expectations, I quite liked the main characters in Cutie and the Beast, and I loved Carter touching upon blended families and trying to balance the romance with reality. However, Abel and Elliott didn't really share that love connection, almost as if they were better suited platonically than romantically. I did like how they were as friends and as parents, but as romantic partners, something was lacking. What did work well was the humor and was something that I appreciated. While this wasn't my favorite read from Carter, I did enjoy Cutie and the Beast more than Weight Expectations. 3.5 stars. ♥

Read my reviews for the Cipher Office series:

Sticking to the Script (book two) - five stars - My Review

Purchase Cutie and the Beast on Amazon.