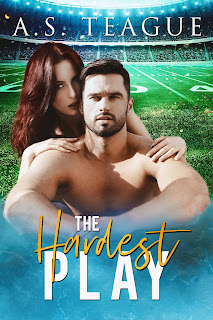 My head snapped back. What the hell was he talking about? “I never asked you to fix anything.”

He started to pace his living room like a caged animal. “Not yet. But you would eventually. And I’m sorry, I would love nothing more than to be the man to move heaven and earth for you, but I can’t. Do you understand? I can’t!”

I took a step toward him, but he backed out of my reach. Careful to keep my voice low and eve, as though I would spook him I said, “So, let me fix it.”


A.S. Teague is one of those storytellers who slowly but surely worked her way onto my go-to list of must-read authors. With each new book she’s released, she’s shown me that the time I put into reading her books isn’t wasted. Now she’s got the third novel in her Hardest series (side note: I’m so happy this series finally has a title, and while I’d thought this would have been an appropriate title for it, I’m glad it’s now official.), and she's certainly left the best for last. FYI, I’m just assuming this is the last because it felt like it. The Hardest Play didn’t feel as interconnected as the first to books, although it still has ties because the male main characters in all three books all belong to the same circle of five tight-knit friends who met while playing football in college and would go on to become stars of the professional game post-college.

The Hardest Play is the story of thirty-two-year-old pro footballer Quinn Miller, a gifted running back who’s just been traded to the Atlanta Falcons. As fantastic a player as he may be, Quinn is exactly receiving the warmest of welcomes from his new team, not that he’s all that surprised given the not-so-great impression he left with his former team during his last year. He knows he has a lot to prove, and football needs to be his top priority, but even the sport takes a backseat to his younger sister, especially having promised their late mother he would always take care of Jamie. But when he crosses paths with landscape architect Georgia Reed for the second time, he’s quickly smitten by the beautiful and self-confident woman. She could well be “the one”, but his secrets and her father—his coach—make things complicated.

I refused to have anything or anyone distract me while I was reading this book. From the moment I saw how devoted Quinn was to his sister, I was hooked. Quinn’s childhood after his mom passed away was heartbreaking, and it gave me a better understanding of why he and Jamie were the way they were as adults. Georgia’s presence in his life, however, allowed him to actually breathe—to want things for himself, but that was something that also gave him pause because he was so used to putting Jamie first, even ahead of football. Quinn and Georgia not only had to fight for their relationship, but they also had to realize—Quinn, especially—that they deserved not just a slice of happiness but the whole pie. Bonus points for appearances from past favorite characters as well. I’m giving The Hardest Play five-plus stars. ♥

Read my reviews for the Hardest series:

The Hardest Route (book one) - four stars - My Review

Purchase The Hardest Play on Amazon.