Review: Shake You by MV Ellis (Boys of Trinity Hall #3) 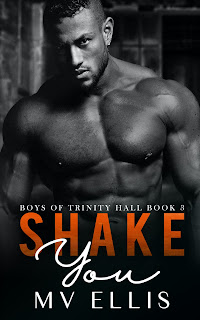 Note: An advanced reader copy (ARC) was provided by the author via Lip Service PR.

Three books in and MV Ellis continues to leave me feeling quite satisfied. Shake You is the third novel in Ellis's Boys of Trinity Hall series, and it's employed the enemies-to-lovers trope really well, making for yet another fantastic addition to the collection. The Cygnus Dei may not be as secretive a society as they fancy themselves to be. There's a journalist for the college paper working on an exposé and witnesses something she shouldn't have. When one of the top members of Cygnus Dei receives photographic proof that someone has gotten too close for comfort, the fact that said journalist's and Cygnus Dei member's paths are about to unexpectedly cross makes for some interesting times. After all, Bryce Hamilton and Honey St. George don't run in the same circles, and now they're forced upon each other because Honey's been tasked to write an article profiling the star student athlete. Now, not only do they share a mutual attraction, but have a common enemy as well, both of which leave them quite shaken.

I know that friends-to-lovers is one of the top romance tropes out there, but I've always had a particular preference for enemies-to-lovers because who doesn't love the tension that simmers and the back and forth that goes on between the main characters? MV Ellis adds these elements well in her third Boys of Trinity Hall series, and she's also given readers two main characters who are perfectly suited for each other as they not only go toe to toe but also take down the walls surrounding them. The added mystery of who's behind the blackmail scheme and pitting one against the other made for an even more enticing read than it was. I'm giving Shake You five-plus stars! ♥

Read my reviews for the Boys of Trinity Hall series:

Break You (book one) - five-plus stars - My Review

Shake You (book three) - five-plus stars - My Review (posted above)

Purchase Shake You on Amazon.