Review: The Play of His Life by Amy Aislin 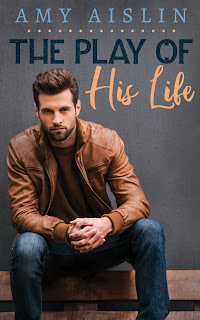 Originally released by MLR Press in 2017, Amy Aislin has re-branded and independently published The Play of His Life, a second-chance romance that finds former best friends and lovers crossing paths after six years of no communication. Christian Dufresne and Riley Deschamps were inseparable after they met in the second grade, becoming the best of friends and sharing a love for hockey. They would inevitably fall in love, but college would lead them to different directions, and whether it was because one didn’t hold on tight enough or the other gave no reason for them to have a future, Christian and Riley went their separate ways, with the former becoming a digital marketer and web designer and the latter getting drafted to the professional hockey league. An injury ends Riley’s hockey playing days, opening a bakery with a friend in his hometown, and who should walk through the shop’s door than none other than his T.

This was a sweet story about friendship and love and knowing when to let go and walk away and when to stand your ground and fight for the person who matters most. Christian was easily my favorite character in the book. His devotion towards Riley wasn’t limited to their time together as best friends and boyfriends when they were younger. It was clear that he loved Riley a great deal and would have been willing to do almost anything and everything for him. On the other hand, Riley had two loves: Christian and hockey. Now, Riley was, for all intents and purposes, a good guy, but I think I hesitated with him because it almost felt as if he would be thinking one way in his head, i.e. blaming himself for the split, and then choosing to lay some of it on Christian when they would talk. It also felt like Christian loved Riley more than Riley loved him. I’m not denying they loved each other, but it never seemed like it was an equal thing. Still, I did enjoy the story and the main characters were easily likable. I’m giving The Play of His Life 3.5 stars out of five stars. ♥

Purchase The Play of His Life on Amazon.