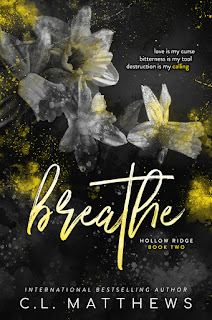 Breathe is the second novel in C.L. Matthews’s Hollow Ridge series, and while this story features a different couple from the one in the series starter, Inhale, Exhale, I’m going to recommend that you read the first book before diving into this one because there’s a particular story line that continues here in this new book. Fair warning, though: there is cheating in book one, and one of the main characters in book two played their part in the cheating. I’m not going to say how or why because I don’t want to spoil the series starter for readers who intend to read it. More fair warning: there’s cheating in book two as well.

Thirty-six-year-old Tobias Hayes lost his best friend, the woman he loved, and his brother all in one fell swoop, and his life has been out of control ever since. When he meets nineteen-year-old Josephine Moore, it was supposed to be nothing more than a drunken sexual encounter they were both going to walk away from. But that was only the beginning of Toby and Joey’s story—and it isn’t quite a love story, not when the hate overpowers the love, and lust could be the sole thing that’s keeping them together.

I know a lot of people didn’t like Toby a whole lot in the first book, but I had more respect for him than I did his brother, Jase (who still didn’t win me over with his appearance in this second book). Toby has been through a lot. Does it excuse his bad behavior here? Nope, but it does offer up greater perspective on why he is the way he is. There’s no denying that when he loves, there’s an obsessiveness and possessiveness to his behavior, which at times can be rather stifling. Inasmuch as Joey is a young woman with a backbone of steel, she is also a female main character with a great deal of vulnerability, making her more fragile than you would think. The flip-flopping between past and present and the insertion of viewpoints from outside of the main characters grew to be distracting, but Breathe was still an overall four-starred read. ♥

Read my reviews for the Hollow Ridge series: