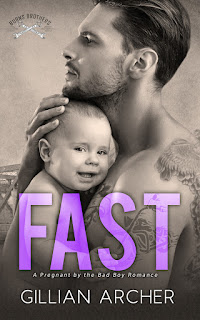 Fast is the second book in the Burns Brothers series from Gillian Archer, and here we have twenty-seven-year-old Ryan Burns's story. When he first notices the gorgeous girl hanging around with a motorcycle club composed of one-percenters that bring in a lot of business for Badass Builds, Ryan automatically assumes she's someone's old lady. However, Hope Stephens isn't any biker's old lady--she's an MC princess, daughter of none other than the president of the West Coast Kings, T-Bone. The best thing to do would be to keep his distance, but Hope has set her sights on him. One night together was all it was supposed to be, but one positive pregnancy test later, and Ryan and Hope find themselves moving fast forward into being united as parents-to-be to their unborn child...and maybe even more to each other. She wants to keep things quiet, but when word gets out, dues will be collected.

I'm not entirely sure how old Hope is--I'm guessing early twenties--but there was a certain naivete to her that sometimes boggled the mind. Early on in the book, her biological father does something that would have had me wanting to get away, but nope, she stays on, maybe in hopes of somehow building a father-daughter relationship with him. Then there was the whole handling of her relationship with Ryan, which was rather frustrating. So yeah, I wasn't a huge fan of Hope's, but Ryan? He was the saving grace in this coupling. He was sweet and supportive and had a maturity to him that surprised me, almost as if it was triggered by the sudden change in his status from single guy with no strings attached to father-to-be who needs to get his life in order. The family drama surrounding the brothers is still very much there, and Dylan...well, let's hope he finally learned his lesson in this book. Overall, this took longer for me to connect to than the first book, but it was still a pretty okay read. I'm giving Fast 3.5 stars. ♥

Read my reviews for the Burns Brothers series: