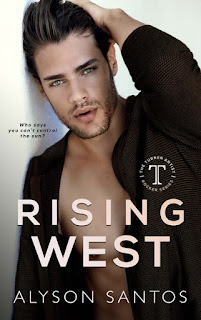 Every second, every breath brings a flash of art to the air around him. You see it in his eyes, the way his fingers tap out silent melodies only he can hear. That's how I know he will be my blessing and my curse. I already love him for the very thing that guarantees he will never be mine. Artists like Mason West are fueled by one force, one love that will consume them to destruction.


My introduction to Alyson Santos's writing came by way of her standalone paranormal romance Haunted Melody early last year, and while that turned out to be a good read, it's her latest novel that has completely stupefied me with how absolutely awe-inspiring it is. Rising West is the first book in the Turner Artist Rocker series, and we meet Mason West, a twenty-four-year-old roofer and single father to four-year-old Brooklyn who once had dreams of writing and playing music that was his and having a family with Katrina Holloway, the girl he loved, before he lost the latter in the blink of an eye and the former slowly slipping from his grasp. Just when he was finally coming to the sad realization that maybe it was time to let go of any hope of getting his music out there, he meets the head of Turner Artist Management. She needs a replacement for the lead singer of one of the hottest bands around, and what she's seen of Mason has her more than impressed. The litmus test is showing Burn Card that he's exactly what they need, but convincing their twenty-five-year-old leader, keyboardist, and songwriter, Liberty Blake, wasn't going to be easy at all. Will his presence lead to a discordant short-lived gig or will they create epic music together?

Where do I even begin listing down every single thing I loved about this book?! It gave me all. The. FEELS!!! Le sigh. From the single parent story angle to the soul-broken but gifted songwriter slash musician and the heartbroken but talented leader of Burn Card aspect of the story, I was interested and intrigued and absolutely emotionally invested. There were also bits and pieces that tie in to the overall tale rather than be distractions to the main story line. I thought that the blurb coming from the point of view of Sam, Burn Card's manager and Turner Artist Management's head honcho, was a creative turn. The journal entries at the beginning of each chapter was genius because it allows for glimpses into Mason's past without having your typical flashbacks. Both Mason and Liberty were fabulous main characters, but this was essentially Mason's story and it was one that had me empathizing with him and desperately wanting to give him a hug. There were supporting characters, each one notable but not a single one a scene-stealer, save for Brooklyn who was quite adorable. If I had to nitpick, I'd say the only thing this book was probably missing was a furry pet, but maybe Dizzy the unicorn will suffice. Alyson Santos may have left me with a four-starred first impression with Haunted Melody, but she's now given me a five-plus-starred second first impression for Rising West. I cannot possibly recommend this novel enough, nor can I wait for the next book! ♥