Review: Back to Shore by Taylor Danae Colbert (Meade Lake #1) 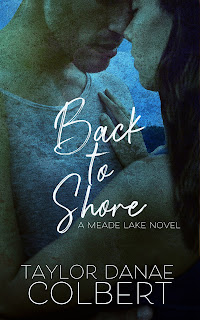 "He's a rope, and he may have some fray to him. There might be some knots along the way, but if I follow him, if I hang on, I know I'll get back to shore."

Taylor Danae Colbert is a new-to-me author, and my introduction to her writing was everything I didn't know I needed. Back to Shore is the first book in her Meade Lake series, and after reading a review a friend of mine posted on Goodreads, I just knew I had to experience this for myself. Thank goodness I have friends who have excellent taste in books because this romance was far better than I could have ever hoped for.

Back to Shore is the story of a twenty-nine-year-old woman named Mila Walton Boughman, and when readers first meet her, she's on the heels of signing off on her divorce to her husband of five years, Luke. To get her life back on track and see a better future for herself, Mila needs to live in the present and confront her past--one that includes her then-seventeen-year-old twin brother, Chase, dying at the hands of her then-eighteen-year-old boyfriend, Ryder Casey. She knows she needs to forgive him to move on; what she doesn't know is Ryder needs her forgiveness just as much.

The angst! Gah! I am a self-confessed angst addict, and while I don't require it in every single book I read, I love it when it's so well integrated in a story so that it doesn't come off as drama for the sake of drama. I must confess that I was worried I wouldn't connect with Mila in the first couple of chapters, especially with how she was towards Luke. However, I stuck with it, and I'm glad I did because I had a better understanding of why she was the way she was and why seeing Ryder was necessary.

The history that ties Mila to Meade Lake in general and to Ryder in particular was mostly good, but Chase's death overwhelmed any and all of the good, leaving her barely treading through life in the twelve years that followed. And Ryder! Goodness... How my heart broke for him as details of the life he lived over the those same years came to light. I think he was more of a survivor of those circumstances while Mila became a victim, but that doesn't diminish either of their experiences, just that they lived with the consequences and dealt with them differently. This was such a beautiful and haunting story of healing and perseverance and the cast of characters--and I mean the ENTIRE cast of characters--is unforgettable. Back to Shore is, one of the most touching and inspiring love stories that I have read this year. Five-plus stars. ♥

Purchase Back to Shore on Amazon | Apple Books | B&N | Kobo.