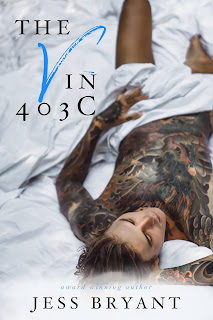 The V- in 403C is the second book belonging to the same book universe as The D- in 403B, although either one may be read as a standalone, and this time around, Jess Bryant has added a touch of the forbidden to her story. Now, just because the whole "forbidden" thing is there, it doesn't mean that this is a dark or heavy read. What we have here is two young guys who meet in a club and share an attraction but nothing comes of it, and they're convinced they'll never see each other again...until they do.

Twenty-two-year-old Jonah Monroe was his parents' child, so being labeled a genius wasn't all that surprising. He's now a doctoral candidate as well as having been chosen as the teaching assistant of one of the campus's top history professors. While academic career may be stellar, his personal one isn't much to brag about. He counts two people as his friends, and while he may be out, he's never been in a relationship. When he meets twenty-one-year-old Reed Matheson in a club, he can't quite understand why someone as hot as Reed would pay him any attention. While he may have run off before anything more could happen, Jonah is shocked when Reed shows up in his classroom--as his student. Is what they have worth breaking the rules for?

Jonah and Reed's story was a good follow-up to Declan and Brett's story in The D- in 403B. While Declan and Brett do make an appearance here, the only actual connections between the two books is Star Hernandez, Declan's foster sister and Reed's best friend (and ex-girlfriend), and the 400 Block Apartments, which is where Jonah lives at and is neighbors with Declan and Brett and Star (who lives in 403D with her boyfriend). So yes, this is very much a standalone, but read the previous book anyway because it was a rather fun enemies-to-lovers read that I quite enjoyed.

While I make no secret of my love of angst in my books, there wasn't much of it here and I'm actually not complaining. I liked getting to know both the main characters, and it was interesting to see how they would manage the whole TA and student situation. These two were also opposites to a certain degree, and I liked how they brought out the best in each other. I was happy there wasn't any unnecessary drama in terms of some other student being all envious or spiteful and doing something underhanded like reporting Reed and Jonah to the administration. While I did enjoy The D- in 403B a smidgen more, The V- in 403C was still a four-starred read all in all.