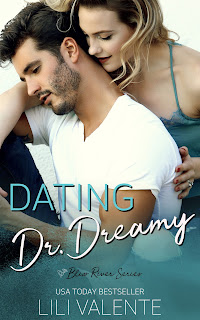 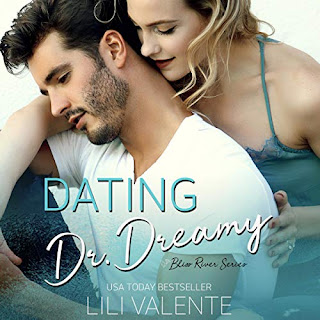 Note: An advanced reader copy (ARC) and an advanced listener copy (ALC) were provided by the author.

Lili Valente's got a new series, and it's got all the small town romance feels that I look forward to with this particular trope. Blue River starts off with a story about taking a chance, whether it be with your true love, trusting someone who broke you, or knowing when to let go or hold on. Dating Dr. Dreamy is that story, and it's got an independent woman who has her own catering business alongside her two sisters and a doctor hoping to win her back. I love reading the initial offering in a new series because I want to see what sort of tone the author sets for everything to follow, but I had nothing to worry about because Valente did not disappoint with this first book!

She's twenty-five-year-old Lark March, and over the past three years, she's slowly but surely making Ever After Catering into a success with the help of her oldest sister, Aria, and their youngest sister, Melody. Everything is going well in her life when who should return than Mason Stewart, a doctor about to join a practice in Atlanta who also happens to be the guy who broke Lark's heart four years ago when he upped and disappeared without a word of explanation or goodbye. She was nineteen and he was twenty-four when they fell in love, and two years later, she thought they were headed towards their happily-ever-after. Mason wants to prove that he's changed over the past four years, but he's about to realize he isn't the only one who's changed.

Goodness but how I adored Lark and Mason, and that's saying something considering I was wholly prepared to totally NOT like the latter, not after the way he left the former and had made little to no effort to reach out or make amends in the four years they were not together. Alas, Mason won me over within the first few pages he made his presence known. There was just something about him that made me believe he was sincere and remorseful. That doesn't mean, though, that I wanted Lark to give in right away. Good for her for staying strong and making Mason earn back her trust (because hello, she obviously still loved the guy). The last couple of chapters did feel a wee bit rushed, and I didn't really see the need to have a chapter from Aria's viewpoint, but Dating Dr. Dreamy made my heart happy, and it easily snags 4.5 stars.

Now, as far as the audiobook is concerned, well, what can I say other than Lili Valente and Jason Clarke are a narrating pair that have proven time and again that they're partnership is a successful one for them and a highly satisfying one for listeners like me. Stories don't necessarily translate well when done in audio, but with Valente and Clarke taking Valente's writing and bringing it to life, I really don't have anything to complain about. All I need to do is sit back, listen, and fall in love with this story all over again. Not all that difficult with this writing and narration. Audio gets 4.5 stars.