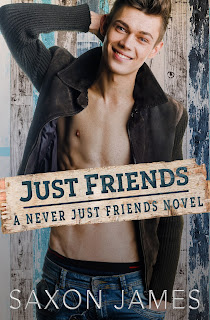 Saxon James may not be a new-to-me author, but since my introduction to her writing came by way of Power Plays & Straight As, co-written with Eden Finley and the first in their CU Hockey series, Just Friends is my official first foray into James's writing as a solo author. This is the first in her Never Just Friends series, and it was one that I enjoyed immensely. This wasn't just your run-of-the-mill friends-to-lovers romance; instead, this is the story of two boys who became the best of friends when they were eleven, were forced to part seven years later, and reunite after five years apart. One's been in love with the other for years; will the other one finally clue in?

Returning to his native Australia was a decision Royce Williams and his parents made out of necessity. The surgery was meant to make his epilepsy more manageable, but it also meant leaving his best friend behind. Five years later, he decides the time has come for him to Sunbury, Oregon--to the town he hated--in order to spend a few weeks with Tanner Everett and to make a couple of confessions: that he's gay and he's been in love with Tanner, who's straight, since they were kids. Doing so may very well end his friendship with the person who means most to him and with a shattered heart, and he'll leave, never to return. But Tanner may surprise his Roo...and himself.

Ah, how I loved reading Roo and Tanner's story! These two had great back stories and how they became best friends was definitely interesting, almost as if they were meant to be connected in one way or another. As close as they were, they also had certain issues and insecurities that were holding them back when it came to both personal and professional decisions. I was so happy that the oft-employed parental or familial rejection story line wasn't used here, offering up some positive change of pace. The supporting cast also has me curious, so I look forward to reading the series going forward. Kudos to Saxon James for a five-starred series starter in Just Friends.