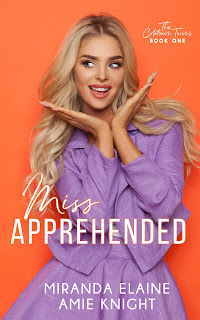 It all begins with a case of mistaken identity, but pretty soon, the (bounty) hunter has no problem making do out with his pretty (kooky) prey. Thirty-one-year-old Jake Blackwood is a bounty hunter and his target is none other than the infamous Tillie Coletraine. He's finally found her and he has no qualms slapping the cuffs and hauling her in. She may insist that she's not Tillie, but he knows better...or maybe not. When it turns out that the young woman he has before him is actually Tillie's twin sister, Millie, Jake realizes that it's still a win-win situation. The twenty-four-year-old sassy wannabe pop star is going to help him lure in her twin, and he's going to have his way with her. And more then one time because Jake has decided: Millie is all his.

This super quick read was an over-the-top romantic comedy. Originally released under the title Jail House Rock and with the authors, Miranda Elaine and Amie Knight, using the pseudonym "Liberty Laine", this new edition has been updated. I never had the opportunity to read the original edition, so I can't really make any sort of comparison. However, this updated version did make me laugh and I enjoyed the twenty or so minutes it took me to read it. Admittedly, there was some suspension of disbelief here, and if you're not a fan of insta-love, this may not click with you. However, if you prefer very alpha-type heroes and supremely sassy heroines, look no further. I'm giving Miss Apprehended four out of five stars. Bring on Tillie and Nate!