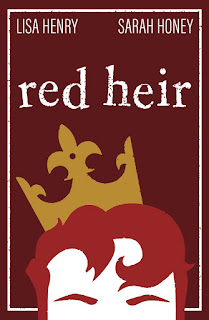 Ah, there's nothing I adore more than a book that leaves me with a smile on my face, my spirit feeling lighter, and my heart gloriously full of joy, and this time around, it came in the form of an M/M fantasy romance from the writing pair of Lisa Henry and Sarah Honey. I've read and enjoyed quite a few of Henry's books in the past, including her co-written ones with J.A. Rock, while Honey is a debut author, and after having read this title, I look forward to reading what she's got planned for the future.

What happens when you bring together a twenty-seven-year-old pickpocket with a penchant for soliloquizing, a twenty-one-year-old grubby stranger who's been imprisoned for years for the possible crime of horse buggery, and a not-so-merry band of paid-for rescuers composed of a feckless leader and an orc, an elf, a dwarf, and finger dragon? Why, you have Red Heir, of course! The "rescuers" bust into the in search of a missing prince, their only clue being that he has red hair. The problem is that there happens to be two redheads--Loth, who eagerly introduces himself as the prince they seek, and the other prisoner he's nicknamed Grub, but who's name may or may be not Cue, Quinn, or something else. Could one of them be the lost Prince of Aguillon, and if so, who is the true red heir and who is the red heiring, erm herring?

This was an absolutely fun-filled read, one that had me snorting unabashedly, snickering mischieviously, or smiling wholeheartedly. I adored this wonderfully creative story that Lisa Henry and Sarah Honey have concocted, and it was very much a well-appreciated change of pace after going through a number of heavier, more angst-filled reads. There was that constant sense of (mis)adventure as well as the rather palpable tension between Loth and Quinn. Calarian, Ada, Dave, and Pie were awesome supporting characters, as were Loth's parents and Ser Greylord. Fine, maybe even Scott. Maybe. I enjoyed Red Heir immensely, and I would happily recommend this book full of thrills and trills to anyone. I'm giving this one five stars.