Review: The Ghost and Charlie Muir by Felice Stevens 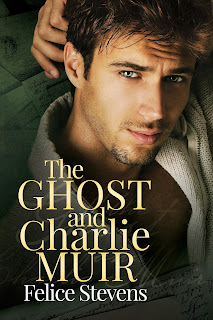 Felice Stevens's newest standalone offers up a much needed and appreciated change of pace for me reading-wise. The Ghost and Charlie Muir is an M/M romance with a touch of the paranormal but it's still got that patented Stevens feel that I've come to know and look forward to in each of her books. The titular Charlie Muir is a twenty-seven-year-old guy who finds out that he's the sole living relative of an absurdly wealthy great-great-aunt who passed away a couple of years ago. He's bequethed a stately home in a one-block location known as Willow Place. It comes fully furnished and anything that needs to be paid for over the years is taken care of. The catch, however, is that Charlie will have to live in the home for a full year; should he abandon the property or decide to sell it, the ownership will be revoked. That shouldn't be difficult, but then, Charlie had no idea his life would change when he meets his neighbor, Ian Gregg, plus the ghost named Rachel haunting his new home.

This book was such a great surprise of a read. The title alone clued me in that this was romance with paranormal elements, and the blurb, of course, confirmed that. However, I wasn't expecting that there was more than one love story for readers to dive into! No, there aren't two separate stories; instead what we have here is Charlie and Ian's romance as well as that of Eddie and Robert, two young men who were also neighbors that became the best friends but always felt so much more from over a century ago. I liked the role that Rachel, aka the ghost, plays in the story and how everything ties together. Naturally, I'm not going to say how because discovering that bit is part of what makes this book such a special read. There's a bittersweet feel to the story, but it is ultimately one that reminds me that a lot has changed in a hundred years, yet so much work still needs to be done to truly move forward. If you've never read anything by Felice Stevens, I recommend The Ghost and Charlie Muir. Five stars.

Purchase The Ghost and Charlie Muir on Amazon.