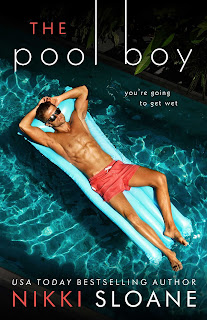 It's been about a couple of years since Nikki Sloane released The Doctor, the first novel in her Nashville Neighborhood series, and while I loved the other books she's released since then, I confess that I've been eagerly awaiting what other shenanigans the residents in this exclusive community may get themselves into. While the wait may have been long, Sloane has more than made it worthwhile because The Pool Boy had sugar (sweet) and spice (heat) and all things naughty that made this oh-so-nice to read--and by "nice" I totally mean deliciously dirty guaranteed to leave you satisfied.

Erika Graham may have wished for a lot of things on her forty-second birthday, but it certainly didn't include catching her husband of two decades in a compromising position with his boss who also happened to be just as married and very much male. Now ten months post-divorce, Erika's best friend to live it up and go after everything she was missing out on while she was still married. It's advice that Erika is considering taking, especially after her hot as hell pool boy catches her sunbathing topless, and he's made it clear he's more than interested in exploring their mutual attraction. The problem? Troy Osbourne is twenty-four and her best friend's only son.

This book was every bit as hot as I expected it to be, but it also had a great deal of heart and one heck of a story to tell. I love that Nikki Sloane doesn't skimp on any of it, and she's given readers two main characters that you seriously want to cheer on as they try to figure out how to be together as a couple and get their you-know-what together as individuals. Yes, the age difference is rather huge, but when you find that person you share a one-of-a-kind connection with, that number doesn't matter as much as you once thought. And a May-December romance with the woman being older than the man that's as well written as this is exactly the stuff I so adore reading.

There's so much more to Erika and Troy's story than her being the woman a teen Troy started fantasizing about and how he tends to her pool and other, erm, needs. However, I'm not going to divulge those details here. I'm actually doing you a favor because you'll be able to read it all first-hand once you pick up. The Pool Boy ends with more of a happy-for-now feel than the usual happily-ever-after, but that isn't even a big deal because it ends with ME being happily satisfied. This snags five stars.

Read my reviews for the Nashville Neighborhood series:

The Doctor (book one) - five stars - My Review